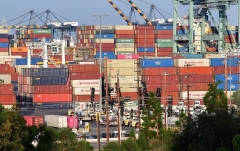 Stacks of containers await processing at the Port of Los Angeles on September 28, 2021. A record number of cargo ships are stuck floating and waiting off the southern California coast amid a supply chain crisis which could mean fewer gifts and toys for Christmas this year as a combination of growing volumes of cargo, Covid-related saftey measures and a labor shortage slow the handling and processing of cargo from each ship. (Photo by FREDERIC J. BROWN/AFP via Getty Images)

(CNSNews.com) - "Where's Pete Buttigieg?" a growing number of politicians and pundits are asking.

Buttigieg, President Biden's transportation secretary, hasn't had much, if anything, to say about the disruptive, multi-day Southwest Airlines flight cancellations that have stranded thousands of passengers; or the nation's supply chain logjam, where dozens of container ships wait off the California coast for the opportunity to unload. The backlog is partly blamed on a shortage of trucks/drivers to pick up and return the shipping containers.

"The supply chain disruption is a crisis," Sen. Tom Cotton (R-Ark.) tweeted on Monday. "This will impact every American, especially those who can least afford it. It's past time for President Biden and Pete Buttigieg to explain what they're doing about this."

In a second tweet, Cotton said: "Pete Buttigieg was completely unqualified to serve as Secretary of Transportation. But Biden still picked him. Now, Pete is absent during a transportation crisis that is hurting working-class Americans.”

On Monday, Buttigieg retweeted an FAA news blurb that said: "To be clear: None of the information from Southwest, its pilots union, or the FAA indicates that this weekend’s cancellations were related to vaccine mandates."

The Federal Aviation Administration was reacting to an Axios report that the Southwest flight cancellations stem from pilots' resistance to the airline's October 4 announcement that it would comply with President Biden's vaccine mandate: "Employees of Southwest Airlines must be fully vaccinated against COVID-19, or be approved for a religious, medical, or disability accommodation, by Dec. 8, 2021, to continue employment with the airline," Southwest announced.

Southwest Airlines on Monday issued a "tremendous apology" to its customers and employees for the flight cancellations that began on Friday evening and continued into Tuesday:

"On Friday evening, the airline ended the day with numerous cancellations, primarily created by weather and other external constraints, which left aircraft and Crews out of pre-planned positions to operate our schedule on Saturday," Southwest said in an Oct. 10 news release. "Unfortunately, the out-of-place aircraft and continued strain on our Crew resources created additional cancelations across our point-to-point network that cascaded throughout the weekend and into Monday."

Southwest said the challenges "were not a result of Southwest Employee demonstrations," although this is disputed. The airline said it hopes to restore its full schedule "as soon as possible."

The supply chain problems, meanwhile, are resulting in a shortage of goods on store shelves as the holidays approach.

Buttigieg's most recent comments on the shipping logjam and shortage of goods came in an Oct. 7 interview with MSNBC's "Morning Joe."

"This is a major challenge, and this is something that's been a major priority for the White House, certainly for our department," Buttigieg said last Thursday:

“It's why the White House set up this task force, and what we're looking at is basically everything between those ships and your shelves that gets the goods to where they need to be. Part of that's things like physical infrastructure. Part of that, as you say, is labor.

“And, look, obviously, it's an incredibly complicated situation. We're talking about global supply chains and it's mostly private sector systems, but we have a big role to play, and that's why we've been convening all of the different players.

Buttigieg said the administration is holding "roundtables" that bring together everyone connected to the ports. He noted that the ships are there, waiting off Long Beach and Los Angeles to unload:

"The question is what's in the way of the container getting off the ship and out to where it needs to be? And a lot of that goes to the other parts of our transportation system,” Buttigieg continued:

You look at what's going on with the trucking. We have some real concerns with the availability of truck drivers. At large truck operators, the rate of turnover for truck drivers has been around 90 percent. So that's, clearly, at least in part, a labor issue. And we're partnering with the Department of Labor to try to establish more apprenticeships and make sure that we're addressing that.

Some of it has to do with efficiently getting those containers onto our rails. Some of it's all the way at the other end of the supply chain -- working, as the task force has been doing, with the big-box stores, for example, that are placing a lot of these orders, to smooth things out and create more certainty. So it's every single piece of this incredibly complex process that gets goods often from abroad all the way into our homes.

And some of these things have been years and years in the making, but what we've seen with the pandemic, is as demand came back, as income came back, people started ordering more goods than ever. Workers -- and by the way, you look at the longshore workers, for example. They have lost members' lives to COVID. and Yet through this period they have handled record levels of cargo.

But keeping up is a huge challenge, and so the work that the workers have been doing, the way that you've seen ports like the port of Long Beach and L.A., which between them  process of about 40 percent of our container traffic, have expanded their gate hours and their availability.

You've got a lot of different people pulling together to help address this issue. It's a long-term issue, but we can take short-term steps. And that's exactly what the president has been calling on us to do through this task force.

Buttigieg said much of the problem has to do with the fact that the United States gets so many of our goods from overseas: "And so we're going to continue to see a lot of challenges. Not just going into the next year or two, but going into the long term.

"And that's one of many, many reasons why we have such a sense of urgency about getting this infrastructure bill, this bipartisan infrastructure vision through, because we know part of the solution is making the right investments in our ports, in our -- on our rails, on our roads. So that we have a more flexible supply chain. So that whenever you have shocks, whenvever you have dramatic shifts in demand, like is happening now, helping lead to those bottlenecks that you see, that the supply chain is flexible enough to deal with it.”