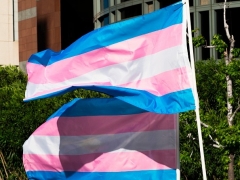 Pink and blue trans pride flags flutter in the breeze in Los Angeles. (Photo by ROBYN BECK/AFP via Getty Images)

That is today's message from your government -- the Biden State Department, to be precise:

“On the occasion of Transgender Day of Visibility, the United States proudly recognizes transgender and gender non-conforming persons and their continued struggle for a life of equality, security, and dignity.”

So begins the declaration attributed to Secretary of State Antony Blinken.

Here’s the rest of it:

Across the globe, members of the transgender and gender non-conforming community are making significant strides towards advancing equality for all people. They are becoming more visible and bravely sharing their stories, providing hope and inspiration to countless people who live in fear for simply being who they are.

Despite these achievements, transgender and gender non-conforming individuals continue to face unprecedented levels of violence, abuse, and discrimination. They are far too often denied their human rights simply because of their gender identity or expression.

The United States supports the empowerment of the transgender and gender non-conforming community. We will continue to work with civil society, like-minded governments, and other human rights defenders to combat the criminalization of LGBTQI+ status, protect vulnerable LGBTQI+ refugees and asylum seekers, advance non-discrimination, and provide meaningful responses to human rights abuses of LGBTQI+ persons. The LGBTQI+ community has an ally in the United States.

The Universal Declaration of Human Rights is clear:  All human beings deserve the full protection of their human rights. In celebrating the contributions of transgender and gender non-conforming persons worldwide, the United States affirms that everyone deserves to live in dignity.  Everyone deserves to be visible.

The problem many Americans have with visibility -- is visibility; namely, the idea of opening female bathrooms and locker rooms to people born male who say they identify as female.

A related concern involves transgender females playing on girls' athletic teams, where the immutable physiology of males may give them a competitive advantage, including for athletic scholarships.

According to GLAAD (The Gay and Lesbian Alliance Against Defamation), the International Transgender Day of Visibility was created in 2010 by transgender advocate Rachel Crandall.

GLAAD says: "Crandall, the head of Transgender Michigan, created TDOV in response to the overwhelming majority of media stories about transgender people being focused on violence. She hoped to create a day where people could re-focus on celebrating the lives of transgender people, empowering them to live authentically, while still acknowledging that due to discrimination, not every trans person can or wants to be visible."