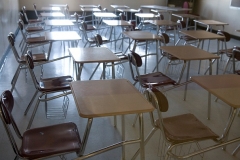 Empty chairs and desks in a high school classroom. (Photo by James Leynse/Corbis via Getty Images)

(CNSNews.com) - "The teachers of this country understand that in-person education is really important," Randi Weingarten, president of the American Federation of Teachers, told NBC's "Meet the Press" on Sunday.

And now that the federal Centers for Disease Control and Prevention has laid out a "roadmap" for re-opening schools, Weingarten expects that to happen -- eventually and with limitations.

So, the issue really becomes, do we have 30 percent more space? Do we have 30 percent more teachers? What I think we need to do is we need to actually try to get as much in-person as possible right now. Have the mitigation strategies. Have summer -- have a real great summer semester to get kids' mojo back in a voluntary way, and then really be planning for next year."

Weingarten pointed to the CDC guidance as well as the billions of dollars that would go to schools if the Democrats can pass their $1.9 trillion COVID-relief-plus bill:

"And I think between the CDC guidance, as well as the resources that President Biden is trying to get in the $1.9 trillion package, we have the highway or the roadmap that allows us to, to do this (reopen schools).

"And it comes down to three things," Weingarten said. "The layered mitigation strategies; the testing, so that you can actually see asymptomatic spread; and vaccine prioritization -- not that every single teacher has to be vaccinated before you open any schools, but you should align the vaccine prioritization with the reopening of schools."

Host Chuck Todd asked Weingarten to point to a school district that is leading the way on reopening, and she mentioned New York City as an example of a school system that is "showing the way."

"Big school district, lots of issues in terms of old buildings and we learned a lot from what New York City did in September and October. And in fact, my members -- I just did a survey of my membership, and 85 percent have said that they would be comfortable being in school, if they had the kind of testing, layered mitigation like, you know, and vaccine prioritization, and that's what New York City is doing."

In the same breath, she faulted California Gov. Gavin Newsom for not making teachers a vaccination priority.

"I think the issue is, if the NFL could figure out how to do this, in terms of testing and the protocols, if schools are that important, let's do it. And my members want it, they just want to be safe."