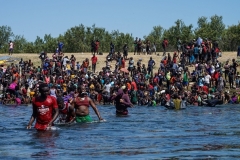 Thousands of Haitian migrants are camping on the US side of the border under a bridge in Del Rio, Texas. Many more are coming. (Photo by PAUL RATJE/AFP via Getty Images)

(CNSNews.com) - As more and more caravans form in South America, intending to head to the overwhelmed U.S. border, Texas Gov. Greg Abbott (R) on Tuesday said President Joe Biden is opening the floodgates, by "doing by the catch and release and allowing people to come in."

"You know, we can deal with a thousand here or a thousand there, migrants coming across the border," Abbott said:

Texas can keep a thousand out. But because of what Joe Biden is doing, that's why you suddenly have ten (thousand), 15 thousand just in the Del Rio sector alone, and because of Joe Biden's open border policies, you're going to see more and more caravans.

I had a briefing today with border patrol with the Texas department of public safety and National Guard and they say there are more caravans coming. So we are increasing our forces as we speak right now, Sean, to be prepared to deal with crossings like this on multiple fronts.

Texas is having to engage in a war that the Biden administration should be fighting to protect multiple fronts of our border where tens of thousands of people are going to be attempting to cross.

Abbott, just back from a visit to Del Rio, where many thousands of illegal immigrants are massed, described the scene as "chaos."

"It is almost like a third world country in this little area that Biden has put all of these migrants in. He called it a "man-made" disaster.”

And since Biden won't secure the border, Texas is trying to do it:

"I signed a budget where Texas is providing $3 billion...to secure the border," Abbott said. He's called up the National Guard to help arrest illegal aliens who are caught in the state. "We have thousands of National Guard engaged as we speak with more being added all the time," he said.

Homeland Security Secretary Alejandro Mayorkas told a Senate committee on Tuesday that he is working on a timeline to reinstate the Trump policy, where illegal immigrants had to apply for asylum from Mexico, waiting there until their cases were settled.

"Senator, I owe you that timeline," Mayorkas told Sen. James Lankford (R-Okla.), who asked him about reinstating MPP. "The difficulty, of course, is that a predicate to the implementation of MPP, as we are required to do pursuant to court order, is our ongoing negotiations with Mexico."