Texas Rep. Gonzales: 'There's No One Guarding the Border. The Threat...Has Never Been Greater' 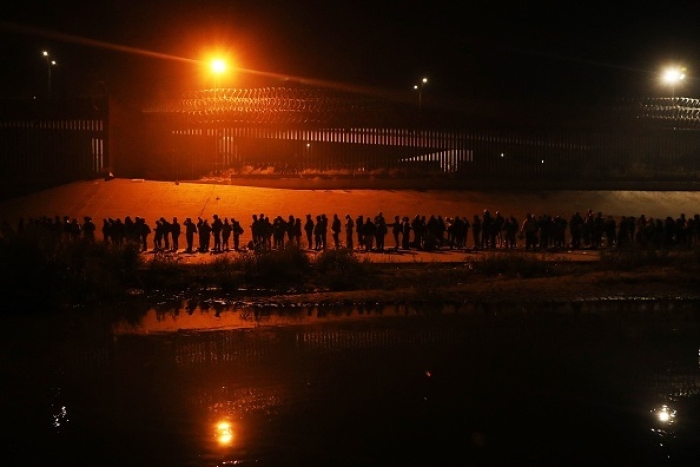 A line of illegal border-crossers stretches as far as the eye can see as they await processing in El Paso, Texas on Dec. 11, 2022. (Photo by HERIKA MARTINEZ/AFP via Getty Images)

(CNSNews.com) - Press reports say the Biden administration is requesting $3 billion to deal with an anticipated surge at the southwest border when Title 42, the public health measure, is lifted on December 21.

But as Fox News reports, the surge is already happening, as thousands of people -- no longer hundreds, but thousands in one group -- have crossed illegally into the United States in just the past two days.

"The administration might as well set this money on fire," Gonzales told Fox News's Neil Cavuto on Monday:

"The city of El Paso, Texas, needs to immediately issue an emergency declaration. And we need to put pressure on the administration to take a look at what's happening.

"When we talk about border security equals national security, that's not just a slogan. Former DNI John Ratcliffe over a year-and-a-half ago mentioned the Biden administration is jeopardizing national security by using the border as a political ploy.

"What I'm hearing on the ground is every Border Patrol agent is in these processing centers, even some from other sectors. So there's no one guarding the border. The threat to American homeland has never been greater."

Gonzales said he went to Mexico this past weekend.

"I went to Monterrey, a very technical city, and I sat down with their mayor and we had discussions. The reality is, the Biden administration has caused this problem.

"In their eyes, this is what success looks like. They wanted this. They have been trying to do away with Title 42 for over a year-and-a-half. And here we are. This is what the Biden administration has caused. The only problem is, the people that live it are those along the border. It's pure chaos.

"It's out of a Hollywood movie, if you will. I will give you some numbers. This weekend, there were 600 migrants, over 600, 611, to be exact, that were released into the streets of El Paso. Today, it's El Paso. Tomorrow, it's your city."

Gonzales said he's "boggled" by President Biden's refusal to discuss the border crisis or even to visit the border to see it for himself:

"We look at it through the lens of, oh, my goodness, thousands, 5,000 people in detention coming over illegally. We think of it, we, conservatives in nature, those that live along the border, see this as a problem.

"For some of the others, the administration, in particular, they view it as success. This is, in their eyes, what success looks like over and over. Here, you have DHS Secretary Mayorkas visiting El Paso tomorrow. He should be visiting with the family members of Border Patrol agents that have committed suicide.

"This is something that shouldn't be partisan. This isn't a political game. There are people's lives at stake. We got to continue to put the pressure on. But we also have to work in a bipartisan manner, which is why my friend Henry Cuellar and I work so closely together."

Even liberal media outlets that tend to ignore the border crisis are now reporting on what the New York Times just called "a surge in migration."

According to that newspaper, "the scenes unfolding in El Paso offered a preview of the challenges that border officials could soon face all along the southern border after the policy comes to an end, as it is expected to, absent court intervention, next week."