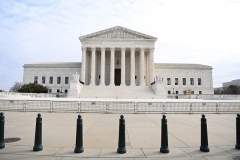 The US Supreme Court is seen in Washington, D.C., on December 7, 2020. (Photo by MANDEL NGAN/AFP via Getty Images)

(CNSNews.com) - The U.S. Supreme Court has placed on its docket a lawsuit filed by Texas asking the court to "delay the deadline for the appointment of presidential electors" so ongoing voter fraud investigations may be completed.

The State of Texas says the Supreme Court should "ultimately" direct (Republican) legislatures in four swing states to appoint the presidential electors.

Texas Attorney General Ken Paxton filed the lawsuit against Pennsylvania, Georgia, Michigan and Wisconsin, where the Trump campaign alleges the election was "stolen" from him.

"It's really important to my state that my voters be represented," Paxton told Fox News's Sean Hannity Tuesday night.

"And if other states don't follow the Constitution, and if their state legislature isn't responsible for overseeing their elections and we have other people who are not under the Constitution supposed to be doing this, it affects my state.

According to the lawsuit: "To safeguard public legitimacy at this unprecedented moment and restore public trust in the presidential election, this Court should extend the December 14, 2020 deadline for Defendant States’ certification of presidential electors to allow these investigations to be completed."

The lawsuit argues that election "flaws" make it impossible to know "who legitimately won the 2020 election and threaten to cloud all future elections,” and therefore, the job of choosing electors should fall to lawmakers in those four states.

Paxton noted that the U.S. Supreme Court is the only one that can decide state-on-state disputes: "And so we're pleading with the Supreme Court, please hear our case. Give us a chance, at least, to argue what we think is right. We want to argue the Constitution."

The Supreme Court late Tuesday asked the four defendant states to respond to the lawsuit by Thursday, December 10, at 3 p.m., but there's no guarantee the Justices will actually hear the case.

Paxton said the heart of the case involves changes in election law that were made by state officials other than state lawmakers:

"It is the responsibility of state legislatures, per the Constitution, to set the rules for election of electors. In this case, those were overridden in the four states we're talking about, were overridden by other officials, whether they were judges or other governmental officials. And that's not the way our Constitution works.

"That's the challenge we have in front of the court -- can this be overridden by people who are not responsible under the Constitution for doing this?"

The lawsuit also alleges that the four defendant states violated the Equal Protection Clause. "In this case, in all four states, we have county by county distinctions that treated voters differently. We, therefore, have unreliable results, and that's a problem," Paxton said.

He noted that it is not "uncommon" for a state legislature to elect the electors: "So we're saying, hey, look, the results here -- we can't go back and let the genie back in the bottle, because we don't know how to match up signatures anymore because they were separated from ballot.

"Since we can't go back and do that, we want to go back to the legislature and let them make a decision since they were elected by the people of their states."

Jay Sekulow, a former Trump attorney and head of the American Center for Law and Justice, said the Texas case "is the most significant" of all the election challenges that have been filed:

"It’s the most significant because it is completely outcome determinative. What does that mean? It means that if the Court were to rule in favor of Texas, those four states, the states named in the complaint, would in in fact have their state legislatures determine the outcome. They would pick the electors.

"This is a lawsuit, of course, against Georgia, Michigan, Pennsylvania, and Wisconsin. It is original jurisdiction, which means it doesn’t start at the district court level. It starts at the Supreme Court of the United States..."

Earlier on Tuesday, the U.S. Supreme Court, without comment, rejected a request by Pennsylvania Republicans to overturn the state's certification of the Nov. 3 election for Democrat Joe Biden.