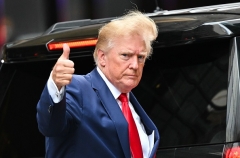 (CNSNews.com) - Christina Bobb, the attorney for former President Donald Trump, was ambivalent Monday night when Fox News's Laura Ingraham asked her, "Does President Trump support or oppose the release of the affidavit" laying out the reasons for the FBI search of Trump's Palm Beach home.

"Well, President Trump has been very straightforward in that he supports all transparency through this process, and he wants what's best for the American people and he's going to rely on the courts to do the right thing," Robb said.

(Notably, throughout his presidency, the courts have rarely sided with Trump.)

Ingraham asked Bobb if Trump would file a motion to release the affidavit, something the conservative group Judicial Watch already has done.

"We support what Judicial Watch has started," Bobb said. "We're watching it very closely, trying to gauge what's happening and will respond accordingly. So I don't have an exact answer today. We're watching the situation and seeing how it develops, and we'll respond in a way that we think is best for the American people.

Ingraham noted that the affidavit is critical because it might establish probably cause for the FBI search, or "raid," as Trump has called it. The Department of Justice opposes the affidavit's release, saying it includes sensitive information.

"You're exactly right, and supposedly it does have probable cause in it," Bobb said. "I find that a little bit hard to believe. Obviously, a judge signed it. But knowing the background and the situation, I don't think there is probable cause to do what they did. So I am myself curious to see what's in it, and we're looking forward to seeing how this all plays out."

Ingraham told Bobb, "given the President's comments earlier, we would think that he would want it all out, out there so everyone can see it in the light of day. I'm still not following what would the concern be on your part for not having it released?"

"No, we are supporting it," Bobb said. "We're not -- I'm not aware of any effort to oppose it. We just are following the lead of the case that's already going and watching to see what happens in response to it."

Ingraham summed up: "So he's not opposing its release, but he's not going to urge that it be released, is that a correct characterization?"

"I would say that's a fair assessment at this point, yes," Bobb said.