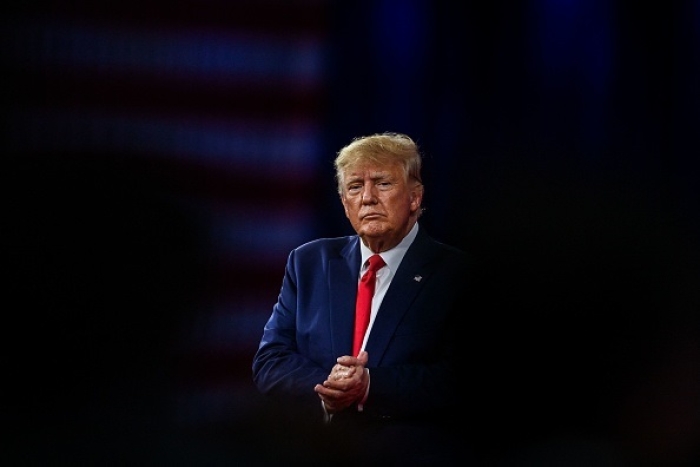 (CNSNews.com) - "These are dark times for our Nation," former President Donald Trump said Monday night in a statement announcing that his "beautiful home, Mar-A-Lago" was "currently under seige, raided and occupied by a large group of FBI agents."

"Nothing like this has ever happened to a President of the United States before," Trump said.

A short time later, Trump's son Eric fumed, "Why is it that the political persecution only goes one way in this country?" Eric told Fox News's Sean Hannity, "Imagine if that happened to Barack Obama. The world would be in an uproar."

"After working and cooperating with the relevant Government agencies, this unannounced raid on my home was not necessary or appropriate. It is prosecutorial misconduct, the weaponization of the Justice System, and an attack by Radical Left Democrats who desperately don’t want me to run for President in 2024, especially based on recent polls, and who will likewise do anything to stop Republicans and Conservatives in the upcoming Midterm Elections.

"Such an assault could only take place in broken, Third-World Countries. Sadly, America has now become one of those Countries, corrupt at a level not seen before. They even broke into my safe! What is the difference between this and Watergate, where operatives broke into the Democrat National Committee? Here, in reverse, Democrats broke into the home of the 45th President of the United States."

"Hillary Clinton was allowed to delete and acid wash 33,000 E-mails after they were subpoenaed by Congress. Absolutely nothing has happened to hold her accountable. She even took antique furniture, and other items from the White House.

"I stood up to America’s bureaucratic corruption, I restored power to the people, and truly delivered for our Country, like we have never seen before. The establishment hated it. Now, as they watch my endorsed candidates win big victories, and see my dominance in all polls, they are trying to stop me, and the Republican Party, once more. The lawlessness, political persecution, and Witch Hunt must be exposed and stopped.

"I will continue to fight for the Great American People!"

'They don't want Donald Trump to run and win again'

Eric Trump told Hannity Monday night this is part of the never-ending harassment from the Trump family's political enemies who won't give up:

"They raise money on it, they send fund-raising emails about it, they brag on camera about it. They go after him, they subpoena him. I am probably the most subpoenaed person in the history of the United States. Every single day we get another subpoena, and they do it for one reason. Because they don't want Donald Trump to run and win again in 2024 and, Sean, that's what this is about today.

"To have 30 FBI agents -- actually more than that -- descend on Mar-a-Lago, give absolutely, you know, no notice, go through the gates, start ransacking an office, ransacking a closet -- you know, they broke into a safe. He didn't even have anything in the safe. I mean, give me a break.

"And this is coming from, what, the National Archives?

"Yet Hunter Biden, he's had firearms crimes, illegal drugs, you know, shady deals with everybody around the world. And by the way, it's all in his laptop for the whole world to see. In his own writing, in his own words, corroborated by everybody. Where are these FBI agents? Where is everybody?

The National Archives and Records Administration (NARA) announced on February 7, 2022 that it had taken 15 boxes of "Presidential records" from Mar-a-Lago, "following discussions with President Trump’s representatives in 2021."

"Former President Trump’s representatives have informed NARA that they are continuing to search for additional Presidential records that belong to the National Archives," the statement said.

NARA noted that the Presidential Records Act mandates that all such records must be properly preserved by each Administration.

Archivist of the United States David S. Ferriero said at the time, "NARA pursues the return of records whenever we learn that records have been improperly removed or have not been appropriately transferred to official accounts."

A day later, in a February 8, 2022 statement, NARA said: "Throughout the course of the last year, NARA obtained the cooperation of Trump representatives to locate Presidential records that had not been transferred to the National Archives at the end of the Trump administration.

"When a representative informed NARA in December 2021 that they had located some records, NARA arranged for them to be securely transported to Washington. NARA officials did not visit or 'raid' the Mar-a-Lago property."

Prior to the return of the 15 boxes of presidential records, on January 31, 2022, NARA noted that "some of the Trump presidential records received by the National Archives and Records Administration included paper records that had been torn up by former President Trump.

"As has been reported in the press since 2018, White House records management officials during the Trump Administration recovered and taped together some of the torn-up records.

“These were turned over to the National Archives at the end of the Trump Administration, along with a number of torn-up records that had not been reconstructed by the White House.”