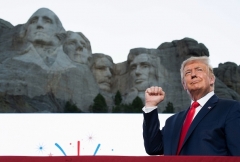 (CNSNews.com) - In four tweets Tuesday morning, President Donald Trump reacted as he often does to criticism aimed at him by his political opponents.

In this case, his Twitter tirade was directed at Michelle Obama, who spoke last but not least at the virtual Democrat National Convention:

The ObamaBiden Administration was the most corrupt in history, including the fact that they got caught SPYING ON MY CAMPAIGN, the biggest political scandal in the history of our Country. It’s called Treason, and more. Thanks for your very kind words Michelle!

Looking back into history, the response by the ObamaBiden team to the H1N1 Swine Flu was considered a weak and pathetic one. Check out the polling, it’s really bad. The big difference is that they got a free pass from the Corrupt Fake News Media!

Somebody please explain to @MichelleObama that Donald J. Trump would not be here, in the beautiful White House, if it weren’t for the job done by your husband, Barack Obama. Biden was merely an afterthought, a good reason for that very late & unenthusiastic endorsement.....

....My Administration and I built the greatest economy in history, of any country, turned it off, saved millions of lives, and now am building an even greater economy than it was before. Jobs are flowing, NASDAQ is already at a record high, the rest to follow. Sit back & watch!

In her taped speech to the Democrat National Convention Monday night, former first lady Michelle Obama said, "What's going on in the country is just not right."

She mentioned Trump by name only once, saying, he is "the wrong president for our country." She accused him of lacking empathy:

Whenever we look to this White House for some leadership or consolation or any semblance of steadiness, what we get instead is chaos, division and a total and utter lack of empathy. Empathy. That's something I've been thinking a lot about lately. The ability to walk in someone else's shoes, the recognition that someone else's experience has value, too.

Most of us practice this without a second thought. If we see someone suffering or struggling, we don't stand in judgment, we reach out. Because there but for the grace of god go I. It is not a hard concept to grasp. It's what we teach our children. And like so many of you, Barack and I have tried our best to instill in our girls a strong moral foundation, to carry forward the values that our parents and grandparents poured into us.

But right now kids in this country are seeing what happens when we stop requiring empathy of one another. They're looking around wondering if we've been lying to them this whole time about who we are and what we truly value.

They see people shouting in grocery stores, unwilling to wear a mask to keep us all safe. They see people calling the police on folks minding their own business just because of the color of their skin. They see an entitlement that says only certain people belong here, that greed is good and winning is everything, because as long as you come out on top, it doesn't matter what happens to everyone else.

And they see what happens when that lack of empathy is ginned up into outright disdain. They see our leaders labeling fellow citizens enemies of the state while emboldening white supremacists. They watch in horror as children are torn from their families and thrown in cages and pepper spray and rubber bullets are used on peaceful protesters for a photo op.

Sadly, this is the America that is on display for the next generation, a nation that's underperforming, not simply on matters of policy but on matters of character. And that's not just disappointing, it's downright infuriating.