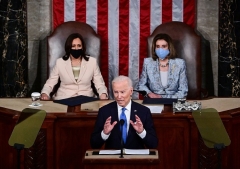 President Biden speaks to masked members of Congress in a sparsely populated room on April 28. ((Photo by JIM WATSON/POOL/AFP via Getty Images)

Both House Speaker Nancy Pelosi and Vice President Kamala Harris kept their masks on while sitting behind President Joe Biden. Biden entered the chamber wearing a mask, but he took it off to speak. 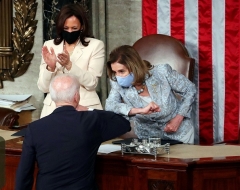 He and "Nancy" elbow-bumped when Biden arrived at the podium.

Look, this country has got to get their schools back. It's got to get these cities open. It's all -- in all cases, Democrat. When you look at Florida, Texas and various other places, they had a much relaxed policy, and yet they had far fewer deaths, relatively speaking. They had far more economic success.

New York has been so badly hurt. It's going to take a long time to recover. California was so badly hurt. I mean, these places, some of the places, there's never been any place that was tougher than Michigan, and Michigan had an outbreak the likes of which you haven't seen since the very beginning.

So, you know, it's very sad. When you looked on television last night, they could have had fewer people in the room than a packed room like I had when I did it. I understand that. But to have a room that was so sparse and to have everybody wearing masks and everybody has the -- you know, they all got the shots. But they all have masks. It doesn't show very much confidence. You know, they want to build confidence in the vaccine because not everybody wants to take it because they have their freedoms, and they don't want to take it.

They want to show confidence in the vaccines and then you see something like you saw last night, a room loaded up with masks. I'm telling you, the people looked like they were choking on their masks. I've never seen anything like it.

Trump, asked about schools reopening, noted that there's "no problem whatsoever" with sending kids back to classrooms:

"The teachers’ union totally controls this administration, and for whatever reason, they just don't want to go back to work. It's a terrible thing.

"And one of the other things beyond the unions, the stimulus is making it so that people will not work. So people all over the country, small businesses, cannot get people to work. You see it in restaurants. You see it all over," Trump said.