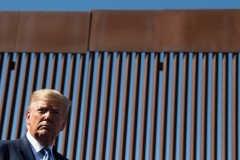 (CNSNews.com) - Former President Donald Trump said on Monday "there's a good chance" he will take another trip to the southwest border "relatively soon."

But speaking in Guatemala on Monday, Vice President Kamala Harris indicated that she will not visit the border: Harris told a news conference she will continue to focus on the root causes of migration "as opposed to grand gestures."

"It could happen relatively soon, just to support these incredible men and women who have done such a good job and, you know, they're just left out to dry. It's disgraceful that nobody's been there from the administration," Trump said.

Trump blamed "incompetence" for the failure of President Biden or Vice President Kamala Harris to see for themselves what's going on at the border.

"So it's totally open. I personally think it's incompetence. I don't think it's to let people in, you know, because so many of the people are criminals coming in. I don't know if you know, but they've opened their prisons. They're sending people in that you don't want in this country, rapists and murderers and drug dealers, and many, many of those people are entering the country."

Trump compared the current influx from Central America to the Mariel Boatlift in 1980, where Cuban President Fidel Castro allowed a mass exodus to Florida, including prisoners and mental patients in the mix.

Host Stuart Varney told Trump he would "shake things up" if he went to the border:

"Well, there's a good chance I will, but I actually think it's incompetence," Trump said.

In Guatemala on Monday, Vice President Kamala Harris was asked why neither she nor President Biden has visited the southwest border. "Republicans have charged that you’re not taking the situation there seriously," the reporter said. "So how do you respond to that criticism and when will that visit come?"

Harris began her answer by telling reporters that "one of our highest priorities" is to "root out corruption wherever it exists."

Then she dismissed a trip to the southwest border as a grand gesture:

"On the issue of Republican’s political attacks or criticism, or even concerns. The reason I am here in Guatemala as my first trip as Vice President of the United States is because this is one of our highest priorities, and I came here to be here on the ground to speak with the leader of this nation, around what we can do in a way that is significant, is tangible and has real results.

"And I will continue to be focused on that kind of work as opposed to grand gestures."