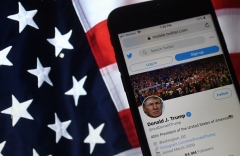 (CNSNews.com) - President Donald Trump began this Monday -- his third day in the hospital -- with at least 18 tweets in rapid succession, explaining what's at stake in the upcoming election.

Although the COVID-infected president cannot campaign in person right now, he can make his views known on Twitter, which he did, starting around 6:20 a.m.

Here's the first batch of 18, to be followed, no doubt, by more tweets as the day goes on:

-- SAVE OUR SECOND AMENDMENT. VOTE!

-- BIGGEST TAX CUT EVER, AND ANOTHER ONE COMING. VOTE!

-- IF YOU WANT A MASSIVE TAX INCREASE, THE BIGGEST IN THE HISTORY OF OUR COUNTRY (AND ONE THAT WILL SHUT OUR ECONOMY AND JOBS DOWN), VOTE DEMOCRAT!!!

-- “I’m voting for Donald Trump. My father is a Union Worker and his 401K has tripled under President Trump.” USA Voter. @foxandfriends Thank you, and remember that the Stock Market is getting ready to break its all time high. NEXT YEAR WILL BE THE BEST EVER. VOTE, VOTE, VOTE!!!!!