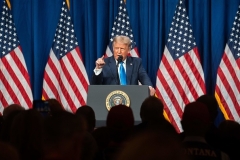 President Donald Trump speaks on the first day of the Republican National Convention on August 24, 2020, in Charlotte, North Carolina. (Photo by JESSICA KOSCIELNIAK/POOL/AFP via Getty Images)

(CNSNews.com) - Democrats -- "What they're doing is using COVID to steal an election," President Donald Trump told the Republican National Convention in Charlotte, N.C.

"They're using COVID to defraud the American people--all of our people of a fair and free election. And we can't do that."

Trump indicated he has good reason to worry, "because we caught them doing some really bad things in 2016.

Let's see what happens. We got them doing some really bad things and we have to be very careful because they are trying it again with this whole 80 million mail-in ballots that they are working on, sending them out to people that didn't ask for them, they didn't ask, they just get them and it's not fair and it's not right and it's not going to be possible to tabulate, in my opinion.

We have to be very, very careful, and this time they are trying to do it with the whole post office scam. They will blame it on the post office. You can see them setting it up. Be very careful and watch it very carefully because we have to win. This is the most important election in the history of our country.

Trump spent much of his speech warning against election fraud, which he described as "more dangerous" than spying on his campaign, "because it's more effective."

He noted that his administration is now challenging states that have adopted universal mail-in balloting:

Trump repeated his argument that actual ballots will be mailed to people who didn't ask for them:

Think of it. You're sitting there, you get a ballot...think of it--they'll be sending in--they'll be dumping them in neighborhoods. They'll be people--people are going to be picking them up.

They'll be bribing, they'll be paying off people to grab some. This is going to be one of the greatest scams--and it's common sense--this has nothing to do with politics. It's common sense.

This is the greatest scam in the history of politics, I think.

"Absentee--like in Florida--absentee is good. But other than that, they're very, very bad."

Trump said the enthusiasm is all on the Republican side, and he said Democrats will use ballot harvesting to make up for the lack of Democrat enthusiasm for Biden:

"But here's the thing. So, if they don't have any enthusiasm -- so you'd say, 'Are you gonna vote? I'm not getting up to vote. Okay. I want to watch television instead of voting. Alright. But here's a ballot. '

"It just got to you and you open it oh, here's a ballot. What the hell am I gonna do with this thing? And then they have somebody knocking on your door, and they're harvesting. ‘Hey, have you gotten your ballot? Yeah I have my ballot. You gonna sign it? Well if you want, I'll sign it...Here it is. Get out of here.’"