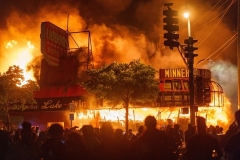 Protesters gather in front of a liquor store in flames near the Third Police Precinct, which they later burned, on May 28, 2020 in Minneapolis, Minnesota, during a protest over the death of George Floyd. (Photo by KEREM YUCEL/AFP via Getty Images)

(CNSNews.com) - In a tweet posted around 1 a.m. Friday, as protesters in Minneapolis burned down a police station and other buildings, President Donald Trump issued two tweets:

"I can’t stand back & watch this happen to a great American City, Minneapolis. A total lack of leadership. Either the very weak Radical Left Mayor, Jacob Frey, get his act together and bring the City under control, or I will send in the National Guard & get the job done right....." 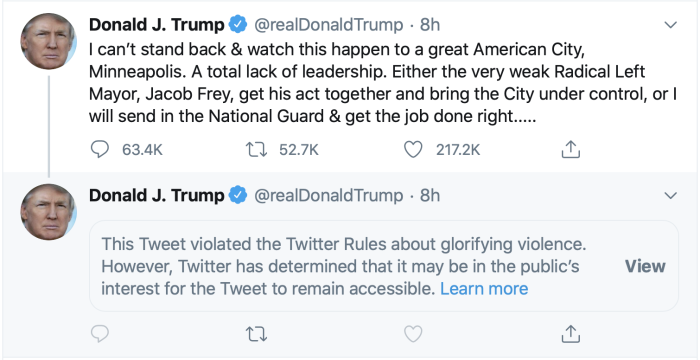 ."..These THUGS are dishonoring the memory of George Floyd, and I won’t let that happen. Just spoke to Governor Tim Walz and told him that the Military is with him all the way. Any difficulty and we will assume control but, when the looting starts, the shooting starts. Thank you!" 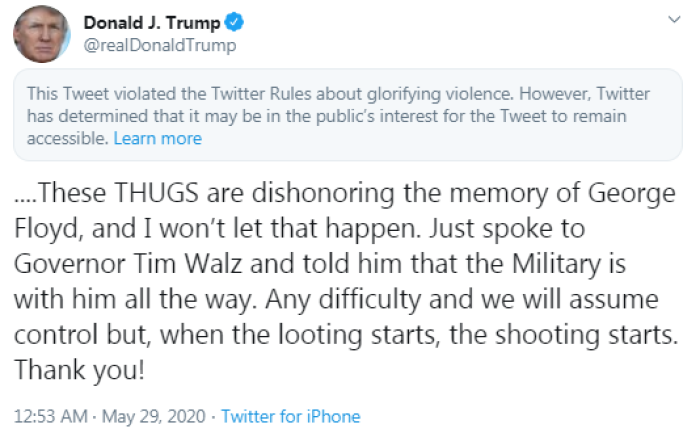 Clicking on the "Learn more" link produces Twitter's definition of the public interest. More on that below.

This is the second time in four days that Twitter has posted a "fact check" or warning label on one of Trump's tweets.

On Tuesday, for the first time ever, Twitter branded the President’s tweets about mail-in voting fraud with a "fact check" calling the president's comments "unsubstantiated." 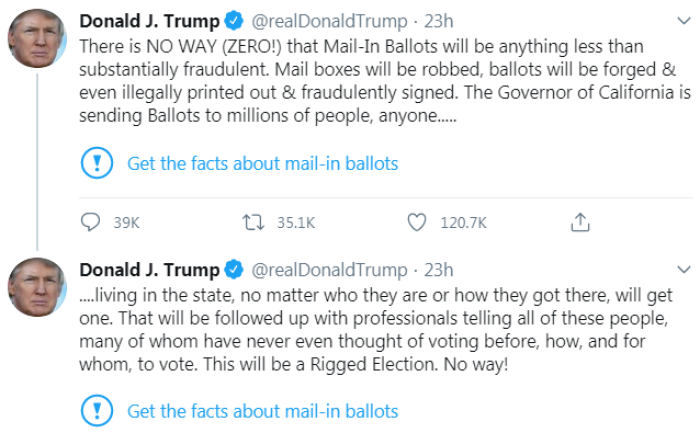 In the warning posted on Friday, Twitter said it generally flags tweets that violate its rules, but there are "public interest" exceptions, it explained:

At present, we limit exceptions to one critical type of public-interest content -- Tweets from elected and government officials -- given the significant public interest in knowing and being able to discuss their actions and statements.

As a result, in rare instances, we may choose to leave up a Tweet from an elected or government official that would otherwise be taken down. Instead we will place it behind a notice providing context about the rule violation that allows people to click through to see the Tweet.

Placing a Tweet behind this notice also limits the ability to engage with the Tweet through likes, Retweets, or sharing on Twitter, and makes sure the Tweet isn't algorithmically recommended by Twitter. These actions are meant to limit the Tweet’s reach while maintaining the public’s ability to view and discuss it. Learn more about this notice and other enforcement actions. 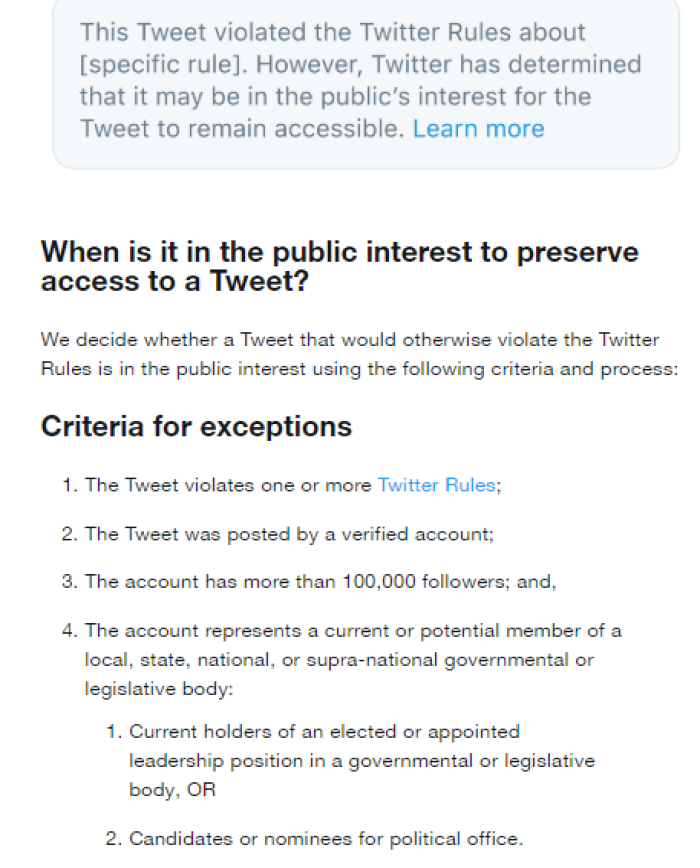 President Trump, in reaction to the "unsubstantiated" label slapped on his Tuesday tweet, signed an executive order on Thursday, which says, "Online platforms are engaging in selective censorship that is harming our national discourse."

Trump's order, among other things, seeks to amend section 230(c) of the Communications and Decency Act to remove immunity from liability for Twitter and other online platforms that "use their power...to engage in deceptive or pretextual actions stifling free and open debate by censoring certain viewpoints."

The order directs the head of each executive department and agency to review its federal spending on advertising and marketing paid to online platforms.

The American Civil Liberties Union said it will monitor if and how federal agencies choose to enforce the order:

"This order is a direct threat at Twitter, Facebook, and other platforms that if they engage in speech that displeases the president, he will unleash the power and resources of the federal government against them,” the ACLU said in a statement.

Congress and the administration would do well to remember that Section 230 is critical to protecting free speech online. The law allows platforms to publish all sorts of content without fear of being held liable for it.

That includes, as Donald Trump appears to have forgotten, his own tweets — even when they include lies. It also includes the videos, photos, and tutorials each of us is relying on to stay connected today.

"Twitter is doing nothing about all of the lies & propaganda being put out by China or the Radical Left Democrat Party. They have targeted Republicans, Conservatives & the President of the United States. Section 230 should be revoked by Congress. Until then, it will be regulated!"