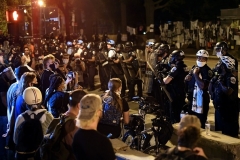 Protesters confront a row of police officers during demonstrations at Lafayette square, across from the White House on June 22, 2020. (Photo by ERIC BARADAT/AFP via Getty Images)

(CNSNews.com) - The protests and rioting that began with the killing of George Floyd in late May have morphed into something much more insidious in late June, to the point where issues that previously dominated the election landscape no longer matter so much, some conservatives are saying.

As anarchists and "protesters" tear down statues, declare autonomous zones, and deface public property in Democrat-run cities, it's "not about the icon on the statue, it's about humiliation and power," Victor Davis Hanson, an author and senior fellow at the Hoover Institution, told Fox News's Tucker Carlson Monday night.

I don't want to get political, but this election no longer is about Donald Trump's tweeting. It's not about Joe Biden's cognitive impairment. It has nothing to do anymore with a lockdown, the virus, the economy, foreign policy.

It's an existential question. A Manichean [good vs. evil] choice between whether you want civilization and you believe that America doesn't have to be perfect to be good. And that we're not in the third century going to destroy all that people died for, or you feel it was inherently flawed with a cancer and we have to use radiation, chemotherapy and kill the host to kill the cancer.

And that's the choice we're looking at. And I'm going to vote for civilization.

As a mob tried to rip down the statue of Andrew Jackson, the nation's seventh president, Monday night across from the White House, conservative author and pundit Dinesh D'Souza tweeted:

"I’m no fan of Andrew Jackson. A crook in the tradition of Hillary and Biden. Founder of the party of slavery, segregation and the KKK. Not my kinda guy. Even so I defend his monument because there is a lawful process for deciding these mattters. We cannot submit to the mob."

Also on Monday night, D'Souza told Fox News's Laura Ingraham that the mob violence in Lafayette Square "is an assault on our deepest convictions."

If you think about what these things represent -- the flag, the National Anthem, St. Junipero Serra, Washington, Lincoln. They really represent our faith, our freedom, the music of the American dream.

And I think what the left is trying to test is whether or not there's anyone who's going to stand up against them. There's a sense of immunity that they have that they can trash these things in front of us. And we will do nothing. They can walk into a church and pull down the statue of Jesus and we will do nothing.

So what's next? Mount Rushmore, the statue of liberty. Are we going to stand by and just watch these things defaced and pulled down and torn down? I feel a sense of helplessness and rage in watching this occur before our eyes. All of this -- this is lawlessness. And we're letting it happen in front of us.

Ben Domenech, co-founder of The Federalist, appeared with D'Souza on Ingraham's show.

I feel like I'm in this instance where the president is the only person who recognizes that we are in the midst of a cultural civil war. One that pits a form of anti-Americanism that is anathema to the American dream that views our history as fundamentally irredeemable tainted forever by racism and just worthy of destruction and wiping away of history and the past in ways that will reach far beyond confederate statues.

We have to concede at this point that all of those historians back in 2017 who said oh, that's ridiculous when trump said that they will come for Washington and Jefferson next. We have to concede that they're completely wrong. They've been completely proven wrong. Where are the conservative leaders who talk so much about law and order and wanting to have progress, who are very easy when it comes to being pro-business or promoting lower taxes and the like.

Why aren't they standing up there arm in arm with the people protecting these statues as we saw in Lafayette Park today against these roving bands of woke white women who want to throw ropes around Andrew Jackson and pull him down because of the A history that they've been taught over the past several decades.