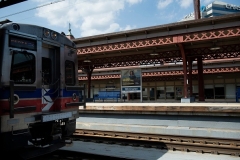 (CNSNews.com) - Virginia's leftist Governor Ralph Northam wants you to travel by train, not by car.

Earlier this week, in an appearance with Transportation Secretary Pete Buttigieg, Northam announced a $3.7 billion project "to expand and improve passenger, commuter, and freight rail in Virginia and create a vital connection in America’s national rail network between the Northeast and Southeast corridors."

Northam told CNN on Thursday, "we need to get people off the roads into other means of transportation."

CNN's John Avalon noted that "Americans love their cars," and he raised the question of how much they will use rail lines.

"Well, first of all, John, it's great to have a partner in Washington that believes in infrastructure and transportation and really takes care of their words with actions," Northam said, referring to President Biden's American Jobs Plan, announced on Wednesday.

Biden is a well-known fan of Amtrak, which he used for his daily commute during his long tenure in the Senate.

Northam said Virginia has been working to expand its rail lines "for a number of years," and he said "it's very important to our business community."

And so we made an announcement with Secretary Pete two days ago where we really opened up rail, expanded rail through a public/private relationship with Amtrak and CSX. There's a bridge coming across the Potomac River called the long bridge, where all the rail traffic up and down the East Coast has to go. It's a bottleneck. So we're adding new tracks to that area. We're separating freight from passenger rail. And, again, this will really open things up.

And the reality is that, yes, people do love their cars, but we need to have other options. We can't pour concrete out of our transportation problems. So we need to get people off the roads into other means of transportation. And this was a really exciting day for Virginia. And I think that our president sees rail as a priority is really going to help as well.

Northam, in announcing his railroad plan on Tuesday, called it "an unprecedented opportunity to build a 21st century rail system in Virginia and along the entire East Coast."

He said it will help move people and goods "more efficiently," reduce congestion and pollution, "and create a more inclusive economy."

He promised a fundamental transformation of Virginia's transportation infrastructure.

Northam said the plan will:

Amtrak was created by Congress in 1970 to take over the majority of intercity passenger rail services previously operated by private railroad companies in the United States. It is a perennial money-loser.

According to the Congressional Research Service in a January 2021 report:

Since its inception, Amtrak has depended on annual appropriations from the federal government to cover its capital (infrastructure, vehicles) and operating (train crews, maintenance) costs. Prior to the Coronavirus Disease 2019 (COVID-19) global pandemic, Amtrak’s financial health had improved in recent years. In FY2019, according to the railroad, revenue covered 79% of its expenses, among the highest such ratios it has ever reported.