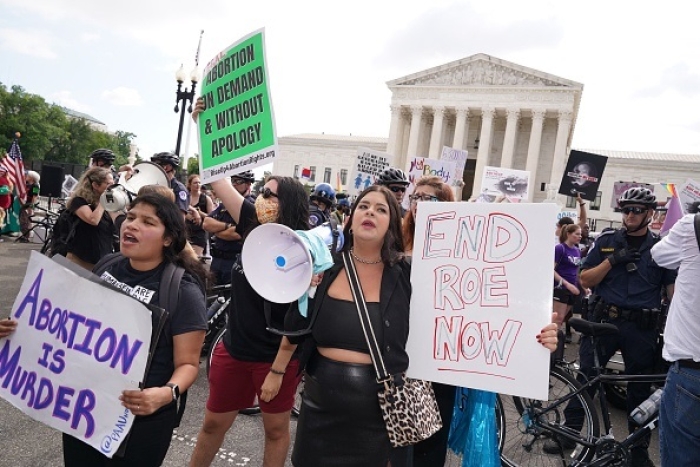 Pro-life demonstrators gather outside the US Supreme Court in Washington, DC, on June 24, 2022. (Photo by MANDEL NGAN/AFP via Getty Images)

(CNSNews.com) - Shortly before the Supreme Court issued a 6-3 opinion overturning Roe v. Wade on Friday, Virginia's secretary of public safety and homeland security issued a statement assuring "all Virginians" that Governor Glenn Youngkin and his administration "are committed to the safety of all Virginians in their ability to exercise their First Amendment rights.

And -- "Ahead of the Supreme Court ruling in the Dobbs case, we are taking preparatory measures across the commonwealth to ensure the public’s safety during these politically charged times," Secretary Bob Moser wrote:

Moser said the Youngkin administration "has consistently coordinated with local and federal authorities to ensure that the Supreme Court justices and their families who call Virginia home are protected from intimidation tactics."

"In May, Youngkin and Maryland Gov. Larry Hogan (R) urged Attorney General Merrick Garland to enforce federal law to prevent the intimidation of justices and their families at their homes. After a draft decision in Dobbs was leaked in early May, protesters gathered at the homes of some justices in Maryland and Virginia.

"Youngkin has spoken to the justices frequently. Ensuring their continued safety is a top priority for our administration.

As we wait for the final decision from the Supreme Court, Virginians should rest assured that whatever the opinion may be, there are ample resources to ensure all of our justices and our citizens remain safe.

"It is imperative that protected peaceful protests don’t turn into violence or destruction after the Supreme Court’s ruling. This is for the safety of all Virginians. Let me be clear: Those who do not heed this message and perpetuate violence will be brought to justice to the fullest extent of the law.

"Violence is not and never will be our legacy."

Demonstrators both for and against abortion gathered Friday outside the now-barricaded U.S. Supreme Court erupting in shouts, cheers and jeers when the opinion, written by Justice Samuel Alito, was released.