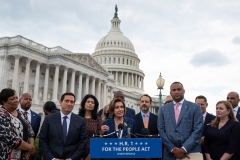 Texas Congressional Democrats join Speaker of the House Nancy Pelosi and Democrat Members of the Texas Legislature for a press conference on "Protecting the Right to Vote in Texas" on Capitol Hill on June 15, 2021. (Photo by JIM WATSON/AFP via Getty Images)

(CNSNews.com) - Vice President Kamala Harris on Monday praised the "extraordinary courage and commitment" of Texas Democrats, who (once again) have fled the state to prevent passage of a voting integrity bill pending in the special session of the Texas Legislature.

"Isn't that the most un-Texan thing you've ever heard? Texans running from a fight?" Abbott asked.

It's like during a football game or baseball game, taking their equipment when they're way behind and just leaving the field. That is not the way that Texans do things. And you captured it perfectly. And that is, they're leaving and abandoning their right to vote. And I tell you what. It's crazy.

But, Laura, this is not over. Because, as was pointed out in that prelude, we have special sessions that last 30 days. And the governor calls them and I will continue calling special session after special session, because over time, it's going to continue until they step up to vote.

But, Laura, I have to point this out. The thesis that they're operating under is completely false because what the Texas law does doesn't hinder anybody's ability to vote. In fact, interestingly, when Texas is seeking to do is add additional hours to vote. Texas has 12 days of early voting, and the hours of which will be expanded, and we will ensure that hours are expanded on Election day also, so their entire thesis is completely wrong.

Ingraham noted that one Texas Democrat said she will press Democrats in Washington to do away with the 60-vote filibuster that allows the Senate to act as a check on most legislation.

Gov. Abbott called it "hypocrisy" for Texas Democrats to essentially filibuster the special session in Texas by walking out, then plead for Washington Democrats to end the Senate filibuster.

Abbott also pointed out that by fleeing the special session, Texas Democrats are blocking other important legislation, including border security, lower property taxes, and funding for law enforcement:

"And so by fleeing the State of Texas, they are doing more than just appealing to the president. They are using taxpayer money on this political junket to Washington, D.C., to prevent us from passing laws that will make our communities better."

Abbott said Republican lawmakers in Texas have the right, under the Texas Constitution, to call for the arrest of the Democrats who are not showing up to do their job, but the arrests can take place only in Texas, which is why the Texas Democrats plan to stay in Washington, D.C., until the special session ends in August.

"Once they step back into the State of Texas, they will be arrested and brought to the Texas capital and we will be conducting business," Abbott said.

It's not yet known who paid for the Texas Democrats' private jet for the flight to Washington.