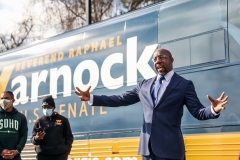 (CNSNews.com) - Georgia Democrat Raphael Warnock, the projected winner of one Senate runoff race, told MSNBC's "Morning Joe" on Wednesday that he loves America because of its potential to become even "greater" through diversity:

"But listen, I love this country," Warnock said:

And I love America because there's always the path that makes the country greater.

But the way that happens is we have to hear the diverse voices that need to be at the table and have the conversation around health care, around criminal justice reform, around voting rights, and there is a kind of tone deafness in Washington, D.C.  People have been suffering for months. They haven't received relief.

And we witnessed politicians in the midst of this human tragedy, over 350,000 Americans dead, the loss of lives and livelihoods, we still saw politicians playing games, making the politics about the politicians. The people of Georgia stood up last night and refuted that.

And I am honored that they would send this kid who grew up in public housing to the united States senate, the most consequential deliberative body on the planet to hopefully help open that door that swings for opportunity for all of our children.

Warnock, appearing earlier on CNN's "New Day," called it a "wonderful day" in both Georgia and America.

"I am an iteration and an example of the American dream. I spoke to my mom last night. And when I think about the arc of our history, what Georgia did last night is its own message in the midst of a moment in which so many people are trying to divide our country at a time we can least afford to be divided.

"We've got big problems, and I'm deeply honored that the people of Georgia have placed their trust in someone who grew up in public housing, 1 of 12 children, I'm number 11, the first college graduate in my family. And I hope to bring the concerns of ordinary people to the United States Senate."

Warnock said he's focused on the people of Georgia, who are "concerned about their lives."

"They're concerned about the fact that they've waited for months and haven't received the kind of COVID relief that they need. We need to be passing the $2,000 stimulus relief checks. Instead, the politicians are focused on their concerns, who's winning and who's losing.

“Meanwhile, too many ordinary working people are losing. And I'm deeply honored that they've given me a chance to go to the Senate and represent their concerns.”

"Well, it's stunning, but I think in America anything is possible, and that's why I love this country so much and I refuse to give in to the forces of cynicism. It takes hard work.

"Change is slow, often it comes in fits and starts. Our democracy tends to expand and then there are moments when it contracts. We've been going through one big contraction, but it's time to extend that American promise to more of our people."

"We flipped a state," he told CNN (although the Jon Ossoff-David Perdue runoff is too close to call). "It's the result of giving people their voice, quite frankly. Over the last ten years, I've worked with many others to register hundreds of thousands of new voters in this state.

"Those voters alongside others stood up last night and they sent a clear message to Washington that this is the people's democracy. You don't own it. If you have power, it's because we've extended it to you for a period of time. It is a kind of stewardship. It is a sacred trust and it's one that I take very seriously and I hope to honor that promise in the work that we will do in the days ahead."

Warnock told CNN the pandemic and relief checks are top of mind for him as he heads to Washington:

"Listen, we've got to respond in an intelligent and thoughtful way to this pandemic. We've got to get the vaccine safely and efficiently distributed and we need to get people the relief that they need. We ought to pass a $2,000 stimulus relief and give ordinary struggling people who are literally just trying to keep their head above water, what they need so that we can begin to get the economy going again."

Warnock said he has no intention of becoming a politician: "I want to be a public servant," he said. He plans to return to his pulpit to preach on Sunday mornings.