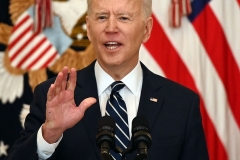 President Joe Biden answers a question during his first press conference on March 25, 2021. (Photo by JIM WATSON/AFP via Getty Images)

"It's sick, deciding in some states that you cannot bring water to people standing in line, waiting to vote, deciding that you're going to end voting at 5:00 when working people are just getting off work, deciding that there will be no absentee ballots under the most rigid circumstances."

A day later, Biden issued a statement, titled, "the Attack on the Right to Vote in Georgia," saying in part: "Among the outrageous parts of this new state law, it ends voting hours early so working people can’t cast their vote after their shift is over."

His remarks are false. In fact, the Washington Post is giving Biden "four pinnochios" for saying what he did.

"On Election Day in Georgia, polling places are open from 7 a.m. to 7 p.m., and if you are in line by 7 p.m., you are allowed to cast your ballot. Nothing in the new law changes those rules. However, the law did make some changes to early voting. But experts say the net effect was to expand the opportunities to vote for most Georgians, not limit them."

The bill says early, in-person voting, including on some Saturdays and even some Sundays, "shall" run from 9 a.m. to 5 p.m. -- thus clarifying the earlier phrase, "normal business hours." But the new law also says, "the registrars may extend the hours for voting beyond regular business hours to permit advance voting from 7:00 A.M. until 7:00 P.M."

(Again, this involves "advance" or early, in-person voting. It does not apply to Election Day, when the hours remain 7 to 7.)

The Washington Post noted that in Biden's home state of Delaware, "It turns out Delaware did not allow any in-person, early voting in 2020. A law signed in 2019 will permit early voting starting in 2022."

The Post further noted that the White House did not give the newspaper an "on-the-record" explanation for Biden's false remarks.

"One could understand a flub in a news conference," the article said. "But then this same claim popped up in an official presidential statement. Not a single expert we consulted who has studied the law understood why Biden made this claim, as this was the section of law that expanded early voting for many Georgians.

“Somehow Biden managed to turn that expansion into a restriction aimed at working people, calling it ‘among the outrageous parts’ of the law. There’s no evidence that is the case. The president earns Four Pinocchios.”

As CNSNews.com has reported, another widely misrepresented part of the new Georgia law involves the provision of water and/or food for voters waiting in line.

But that's not what the law says.

The law says “no person shall solicit votes” by offering to give “money or gifts, including, but not limited to food and drink” to voters standing in line.

But a footnote on page 71 of the bill says: "This Code section shall not be construed to prohibit a poll officer ... from making available self-service water from an unattended receptacle to an elector waiting in line to vote."

The provision is intended to prevent political partisans from approaching waiting voters, handing them water, or food, or gifts, or whatever -- then urging them to vote for so-and-so. That is called voter solicitation.

But clearly, the goal of Georgia law is not to prevent thirsty voters from helping themselves to water, if it's available; or if they can't plan ahead and bring their own.