Wray: FBI Investigating Attempts to 'Weaponize' Drones With IEDs in the U.S. 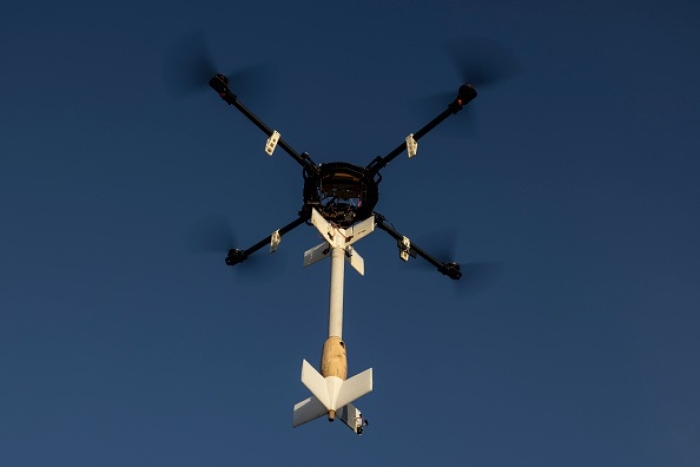 A homemade prototype drone is tested with fake RPG -7 grenade in a field on November 9, 2022 in Kyiv, Ukraine. Drone startups along with major drone companies are participating in the development and research of the technology during the ongoing conflict in Ukraine. (Photo by Paula Bronstein/Getty Images)

"As the threat continues to grow," Wray said, "we are investigating, even as we speak, several incidences within the U.S. of attempts to weaponize -- to weaponize -- drones with homemade IEDs. That is the future that is here now."

Both Mayorkas and Wray urged Congress to renew the legal counter-drone authority that will expire next month.

"It's important for Americans to understand, if that authority is not reauthorized next month, that public gatherings like the Super Bowl in Arizona, like New Year's Eve in Times Square, like Formula One in Las Vegas, and I could go on, none of those things will have protection from this threat," Wray said.

He said the counter-drone authority has allowed federal law enforcement to locate "hundreds -- hundreds -- of drones that have been acting in violation of federal law."

Mayorkas said he was "deeply appreciative" of bipartisan efforts to not only continue DHS authority to counter drones, but also to "expand it."

"And that need is very grave," Mayorkas said.

"And this poses a real threat. We see it very, very often, sometimes by innocent operators who mistakenly interfere with the airspace and cause aircraft to re-route their journeys to bad actors.

"And we see it quite tragically in the war zone that Russia created, with its unprovoked assault on Ukraine These are extraordinarily sophisticated tools that can carry drugs, that can launch weaponry, and we must be able to counter it. It is only an increasing threat. And we hope that Congress passes the legislation that you and Sen. Johnson have proposed."

Mayorkas was speaking to Committee Chair Sen. Gary Peters, who along with Republican Sen. Ron Johnson, has introduced a bill to renew and expand existing counter-drone authorities.