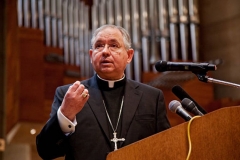 “We thank God for the blessings of liberty. The American people have spoken in this election,” said Archbishop Gomez in his statement--which is posted on the website of the U.S. Conference of Catholic Bishops.

“Now is the time for our leaders to come together in a spirit of national unity and to commit themselves to dialogue and compromise for the common good,” said Gomez.

“As Catholics and Americans, our priorities and mission are clear,” said the archbishop. “We are here to follow Jesus Christ, to bear witness to His love in our lives, and to build His Kingdom on earth.

“I believe that at this moment in American history, Catholics have a special duty to be peacemakers, to promote fraternity and mutual trust, and to pray for a renewed spirit of true patriotism in our country,” said Gomez.

“Democracy requires that all of us conduct ourselves as people of virtue and self-discipline,” said Gomez.

“It requires that we respect the free expression of opinions and that we treat one another with charity and civility, even as we might disagree deeply in our debates on matters of law and public policy,” he said.

“As we do this, we recognize that Joseph R. Biden, Jr., has received enough votes to be elected the 46th President of the United States,” said the archbishop.

“We congratulate Mr. Biden and acknowledge that he joins the late President John F. Kennedy as the second United States president to profess the Catholic faith,” Gomez said.

“We also congratulate Sen. Kamala D. Harris of California, who becomes the first woman ever elected as vice president,” he said,

“We ask the Blessed Virgin Mary, patroness of this great nation, to intercede for us,” said the archbishop. “May she help us to work together to fulfill the beautiful vision of America’s missionaries and founders--one nation under God, where the sanctity of every human life is defended and freedom of conscience and religion are guaranteed.”

During his presidential campaign, Joe Biden staked out a number of positions that directly contradict Catholic moral teachings laid out in the Catechism of the Catholic Church.

Biden, for example, said he supports not only legalized abortion but taxpayer funding of abortion.

“Biden will work to codify Roe v. Wade, and his Justice Department will do everything in its power to stop the rash of state laws that so blatantly violate Roe,” it says.

Roe is the 1973 Supreme Court decision that declared abortion a “right.”

Biden’s website also said: “Vice President Biden supports repealing the Hyde Amendment because health care is a right that should not be dependent on one’s zip code or income.”

The Hyde Amendment prohibits federal funding of abortions except in cases of rape, incest or when the mother’s life is endangered.

This is a screen capture from "The Biden Agenda for Women" page on Joe Biden's campaign website:

The Catholic Catechism’s condemnation of abortion, by contrast, is absolute and unambiguous.

“Human life must be respected and protected absolutely from the moment of conception,” says the Catechism. “From the first moment of his existence, a human being must be recognized as having the rights of a person--among which is the inviolable right of every innocent being to life.”

“Since the first century the Church has affirmed the moral evil of every procured abortion. This teaching has not changed and remains unchangeable,” says the Catechism

“Formal cooperation in an abortion constitutes a grave offense,” says the Catechism. “The Church attaches the canonical penalty of excommunication to this crime against human life.”

On a flight to Brazil in 2007, Pope Benedict XVI was asked about politicians whom the church had recently excommunicated in Mexico for voting in favor of legalizing abortion.

The pope defended the excommunication.

As reported on the Vatican website, a reporter asked the pope: “Do you agree with the excommunication of the deputies in Mexico City on the issue of abortion.”

The pope responded: “Excommunication is not something arbitrary but a measure prescribed by the Code [of Canon Law]. Thus, it simply states in Canon Law that the killing of an innocent child is incompatible with going to Communion, where one receives the Body of Christ. Consequently, nothing new, surprising or arbitrary, has been invented. Only what is prescribed by Church Law has been recalled publically, a Law that is based on the doctrine and faith of the Church, on our appreciation of life and of the human individual from the very first instant.”

This is a screen capture from a page on the Vatican website that is datelined Wednesday, 9 May 2007 and carries the headline, "Interview of His Holiness Benedict XVI During the Flight to Brazil:"

“Biden’s historic and long record of support for the LGBTQ+ community,” says the site, “includes: Supporting the Freedom to Marry. On May 6, 2012, in a historic interview on ‘Meet the Press,’ Biden became the highest-ranking American official to support marriage equality when he declared that love is love.”

The Catholic Catechism, by contrast, holds that marriage is between a man and a women and that homosexual acts are “acts of grave depravity” that “are contrary to the natural law.”

“Sexuality is ordered to the conjugal love or man and women,” says the Catechism.

“Basing itself on Sacred Scripture, which presents homosexual acts as acts of grave depravity, tradition has always declared that ‘homosexual acts are intrinsically disordered,’” says the Catechism. “They are contrary to the natural law.”

“Under no circumstances can they be approved,” says the Catechism.

Joe Biden also supports letting biological males who are “transgender” claim to be females on government identity documents—and to play on girls’ sports teams and use girls’ bathrooms and locker rooms.

“Biden believes every transgender or non-binary person should have the option of changing their gender marker to ‘M,’ ‘F,’ or ‘X’ on government identifications, passports, and other documentation,” says Biden’s campaign website. “He will support state and federal efforts to allow for this accurate representation.”

“On his first day in office,” says the Biden campaign website, “Biden will reinstate the Obama-Biden guidance revoked by the Trump-Pence Administration, which will restore transgender students’ access to sports, bathrooms, and locker rooms in accordance with their gender identity.”

The Catholic Catechism cites Genesis 5:2 in stating: “Male and female he created them.”

“Man and woman have been created, which is to say, willed by God: on the one hand, in perfect equality as human persons; on the other, in their respective beings as man and woman,” says the Catholic Catechism.

“‘Being man’ or ‘being woman’ is a reality which is good and willed by God: man and woman possess an inalienable dignity which comes to them immediately from God their Creator,” says the Catechism.

“In their ‘being-man’ and ‘being-woman,’ they reflect the Creator's wisdom and goodness,” it says.

“Everyone, man and woman, should acknowledge and accept his sexual identity,” says the Catechism. “Physical, moral, and spiritual difference and complementarity are oriented toward the goods of marriage and the flourishing of family life.”