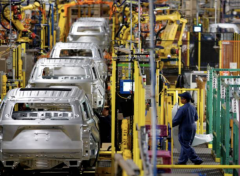 (CNSNews.com) - The United States added 29,000 manufacturing jobs in August with the number of people employed in the manufacturing sector rising from 12,103,000 in July to 12,132,000 last month, according to the numbers released by the Bureau of Labor Statistics today.

“In August, manufacturing employment rose by 29,000, with gains concentrated in the nondurable goods component (+27,000,)” said the BLS August jobs report. “Despite gains in recent months, employment in manufacturing is 720,000 below February's level.”