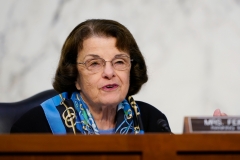 (CNS News) -- When asked whether she agreed with Joe Biden’s position that “life begins at conception,” Senator Dianne Feinstein (D-Calif.) said, “I’m not going to answer the question.”

Biden has said in several interviews that he believes “life begins at conception,” and even expressed this view in the Oct. 11, 2012 vice presidential debate.

At the U.S. Capitol on Dec. 8, CNS News asked Senator Feinstein, “Do you agree with Joe Biden that life begins at conception?”

Feinstein initially said, “Oh, my god, I can’t believe you,” and her aide interjected, “That’s not an escalator question!”

She then said, “I’m not going to answer the question.”

“I don’t think it is necessary for what I do or part of it,” the senator added.

CNS News then said that Biden has “stated that he’s in favor of repealing the Hyde Amendment and using federal funds to pay for abortion services.”

Feinstein then replied, “Well, let me try and find out what’s going on.”

In the 2012 vice presidential debate against Republican Paul Ryan, then-Vice President Joe Biden said, “With regard to abortion, I accept my church's position on abortion as a -- what we call -- de fide doctrine. Life begins at conception in the church's judgment. I accept it in my personal life.”

On the Hyde Amendment, which prevents federal funds from being spent, through programs like  Medicaid, to pay for abortions – except in cases of rape, incest, or life of the mother – Biden had supported it for decades.

He flipped his position in June 2019, however, and now wants to repeal the Hyde Amendment. Biden has said there are too many legal obstacles to abortion today and ending the amendment will help to ensure that women can exercise their right to abortion.

"I can't justify leaving millions of women without access to the care they need and the ability to exercise their constitutionally protected right," Biden said in June 2019.