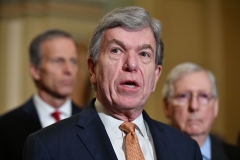 (CNS News) – When asked to predict when the federal government will pay off the $3.78 trillion debt accumulated so far this fiscal year, Senator Roy Blunt (R-Mo.) said it takes “a long time to pay back $3 trillion dollars.”

At the U.S. Capitol on Thursday, CNS News asked Senator Blunt, “In the fiscal year 2020, the federal debt has increased by $3.78 trillion. When do you predict that the government will pay off the debt it added this year?”

Sen. Blunt responded, “Well, it will be a while, and hopefully, what we are doing right now is trying to establish as much of that debt as we can at this remarkably low current interest for as long as we can. But it takes a long time to pay back $3 trillion dollars.”

The current federal deficit, according to the Daily Treasury Statements, has already surpassed the predicted amount for fiscal year 2020.