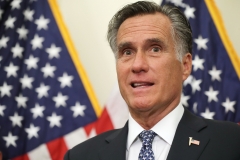 (CNS News) – When asked to predict when the federal government will pay off the federal debt for this fiscal year alone, which currently is $3.78 trillion, Sen. Mitt Romney (R-Utah) did not answer directly but said if we don’t stop spending and “keep adding a trillion every year, it’s going to become overwhelming.”

At the U.S. Capitol on Tuesday, CNS News asked Senator Romney, “In the fiscal year 2020, the federal debt has increased by $3.78 Trillion. When do you predict that the government will pay off the debt we added this year?

Romney said, “Well, I guess if you are like $27-28 trillion [in total debt], and the right way to reduce the burden of that debt is to not keep adding to it every year another trillion.

“If we get the number to be simply held at that level and then we don’t add to it, and we have the normal growth that you would expect, that becomes a smaller and smaller burden,” he said. “But if we keep adding a trillion every year, it’s going to become overwhelming, and that’s why I proposed the TRUST Act, which addresses the ongoing deficits and gets them down to zero.”

The current federal deficit, according to the Daily Treasury Statements, has already surpassed the predicted amount for the fiscal year 2020.

Romney’s TRUST Act is a bipartisan bill that has 14 Republican and Democratic cosponsors. The bill would require the Secretary of the Treasury to submit a report identifying the programs meeting the size and insolvency criteria. The bill would also create “Rescue Committees” mandated to draft legislation that restores solvency and otherwise improves each trust fund program.

Under Trump’s presidency, the deficit has continued to grow. Under the Obama administration, the federal debt grew from $10.626 trillion to $19.947 trillion when he left office.