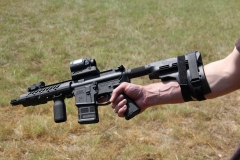 (CNS News) -- Nearly all of the Republicans in the U.S. Senate sent a letter to the federal Bureau of Alcohol, Tobacco, Firearms and Explosives (ATF) challenging a proposed rule (2021R-08) on the use of stabilizing braces, which would reclassify many pistols as short-barreled rifles. This change would threaten "to turn law-abiding Americans into criminals,” said the Republicans in the June 24 letter.

The ATF proposal, "Factoring Criteria for Firearms with Attached 'Stabilizing Braces," was published in the Federal Register on June 10. The rule supposedly would seek to “clarify” that uses of stabilizing braces fall within the guidelines set by the National Firearms Act (NFA) of 1934.

“[T]he way the proposed rule is written makes clear that ATF intends to bring the most common uses of the most widely possessed stabilizing braces within the purview of the NFA,” reads the letter. “Doing so would turn millions of law-abiding Americans into criminals overnight, and would constitute the largest executive branch-imposed gun registration and confiscation scheme in American history.”

“We therefore vehemently oppose this proposed rule and urge its immediate withdrawal,” said the Republican senators.

The letter goes on to explain that the ATF clarified the use of stabilizing braces on large pistols in 2012. At that time, the “ATF announced that attaching a stabilizing brace to an AR-type pistol did not convert that pistol … into a short-barreled rifle (SBR) regulated by the NFA and subject to the NFA's taxation and registration regime,” reads the letter.

The purpose of permitting stabilizing braces initially was meant “to assist disabled combat veterans in shooting large pistol platforms that were otherwise too cumbersome for a disabled shooter to use.”

Since 2012, “millions of law-abiding Americans have purchased braces to add them to their own firearms, or purchased firearms with the braces already attached,” according to the letter.

“Though the agency purports to seek comment, the notice and the criteria laid out in the proposed rule make clear that ATF has already made up its mind: the overwhelming majority of braces currently in use are unlawful,” according to the letter. “ATF is merely covering its retroactive gun grab with a patina of administrative process.”

The letter states “ATF claims, without evidence, that the "demand for 'stabilizing braces' ... sterns from the desire to have NFA items without paying for and undergoing the NFA regulatory regirne.”

“ATF seems to believe that re-characterizing millions of pistols as SBRs [short-barrel rifles] is no big deal because the agency kindly offers gun owners what it deems to be plenty of means of complying.” These “means of complying” include:

The letter concludes, “A crime wave is sweeping America. These aren't broken-windows crimes; they are violent crimes like murder, assault, and robbery. But rather than cracking down on the criminals who are turning America's cities into warzones, ATF and the Department of Justice have decided to go after law-abiding gun owners who are minding their own business and using equipment that ATF seemingly blessed in 2017.

“This is plain wrong. The proposed rule is worse than merely abdicating your responsibility to protect Americans from criminals; you're threatening to turn law-abiding Americans into criminals by imposing the largest executive branch-initiated gun registration and confiscation program in American history. We urge you to turn back. Correct this mistake and withdraw the proposed rule.”