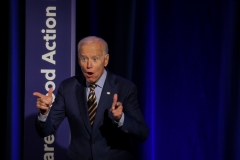 Alexis McGill Johnson, current president of Planned Parenthood, said, “This election is a fight for our country’s very survival…. Joe Biden is the only candidate in this race who will stand up for our health and our rights.”

In a video released by Planned Parenthood on Monday, the former vice president said, "We will protect women's constitutional right to choose, and I am proud to stand with you in this fight.”

Biden plans to back this promise up by including a proposal to repeal the Hyde Amendment if he is elected president. This amendment currently bars the use of taxpayer funds to pay for abortions except in the cases of rape or incest, or to save the life of the mother.

In its latest report (2018-19), Planned Parenthood shows that it received $616.8 million dollars in government health services reimbursements and grants for the year ending June 30, 2019. This is an increase from 2017-2018, where Planned Parenthood received $563.8 million in reimbursements and grants for the year that ended June 30, 2018.

In response to Biden’s endorsement from Planned Parenthood, the pro-life organization Susan B. Anthony List released a statement:

“Joe Biden has spent his entire campaign pandering to the radical abortion lobby. His endorsement by Planned Parenthood, the nation’s largest abortion business, comes as no surprise.

“When Joe Biden flip-flopped on the Hyde Amendment, the Democratic Party’s capitulation to extremism was complete. Now he supports taxpayer-funded abortion on demand through the moment of birth and vows to stack the Supreme Court with pro-abortion justices who will serve life terms.

“Planned Parenthood noted that this election is about ‘life and death.’ On that point we agree – the lives of countless children are at stake. For that reason it is imperative that we re-elect President Trump – the most pro-life president our nation has ever seen – and secure a solid pro-life majority in the U.S. Senate.

Other pro-life organizations released their responses to the former vice president’s endorsement as well.

President of the March for Life Jeanne Mancini said, "It is offensive to hear our nation's largest abortion provider, Planned Parenthood, an organization that claims the lives of 345,672 American babies annually (a third of all of the abortions in this country each year), call the 2020 cycle a 'life and death' election. Those who really care about protecting life realize that the election of Planned Parenthood-endorsed candidate, Joe Biden, will result in a major increase of tax dollars going to the billion-dollar organization, including direct payment for abortions, among other deadly consequences."

However, according to the pro-life group Live Action, abortion beats the top nine leading causes of death combined in the black community.

On average, 649 black babies are aborted every single day in the United States, according to Live Action. The Census Bureau states that black people make up 13.4% of the population in the United States, but the CDC reports that they account for 36% of all abortions.  also, the Arizona Capitol Times reports that a black woman is five times more likely to have an abortion than a white woman.

In 2015, there were more black babies aborted than born alive in the state of New York.  In addition, the black population in the United States was 18,871,831 in the year 1960. From the year 1973 to today over 20 million black Americans have been aborted, reported the Washington Examiner.  Also, out of every 1,000 black pregnancies, only about 526 babiesare actually born, reported the Arizona Capitol Times.