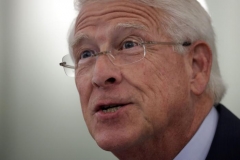 (CNS News) –  When asked how many trillion dollars should be spent on the latest coronavirus relief bill – the Republicans want $1 trillion, the Democrats want $3.4 trillion – Sen. Roger Wicker (R-Miss.) said, “I support the Republican plan.”

At the U.S. Capitol on Wednesday, CNS News asked Sen. Wicker, “Nancy Pelosi says the $1 trillion HEALS Act proposed by Senate Republicans isn’t enough. She wants the HEROES Act which is $3.4 trillion. How many trillions do you think Congress should spend on relief?”

Sen. Wicker responded, “I support the Republican plan that was rolled out Monday. I’m going to decline to negotiate it in public.”

He went on to say that he was more involved in the COVID-19 relief fund planning in March than he is today, but added that he thinks the “Majority Leader’s plan will be very helpful in helping people recover.”

The Republicans’ HEALS Act, which stands for Health, Economic Assistance, Liability protection and Schools, was proposed on Monday.

Speaking about the bill, Senate Majority Leader Mitch McConnell (R-Ky.) said, “So I hope this strong proposal will occasion a real response -- not partisan cheap shots. Not the predictable, tired, old rhetoric as though these were ordinary times and the nation could afford ordinary politics.”

McConnell also urged Democrats to discard their HEROES Act, calling it a “socialist manifesto.” The HEROES Act would provide $3.4 trillion to COVID-19 relief.

The HEALS Act would provide $1 trillion worth of funding and includes a second round of stimulus checks and liability for health care workers, churches and schools.