Biden on When Press Will Get 'Transparency' at Border Facilities: 'I Don't Know, To Be Clear' 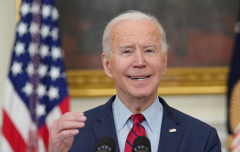 (CNS News) -- When NBC reporter Kristen Welker asked President Joe Biden today how soon journalists could visit the detention centers at the border that apparently are overcrowded with children, Biden said, I don't know, to be clear."

Welker, NBC's chief White House correspondent, asked Biden at his first press conference, "Given the conditions that were just laid out, at the migrant facilities at the U.S. border, will you commit to allowing journalists to have access to the facilities that are overcrowded, moving forward?"

Biden said, "I will commit when my plan, very shortly, is underway, to let you have access, not just to them but other facilities as well."

Welker then asked, "We haven't seen the facilities where children are packed together to really give the American people a chance to see that. Will you commit to transparency on this?"

"I will commit to transparency," said the president.  "And as soon as I'm in a position to implement what we're doing right now. ... This is being set up and you'll have full access to everything once we get this thing moving."

Welker asked, "Just to be clear, how soon will that be, Mr. President?"