Adam Schiff: ‘Trump and His Allies in Congress…Took Action After Action to Undermine Our Democracy’ 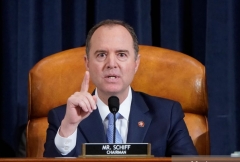 (CNSNews.com) - Rep. Adam Schiff (D.-Calif.), who was the lead House impeachment manager in the January 2020 Senate impeachment trial of President Donald Trump, sent out a tweet on Saturday saying that Trump and his allies in Congress “took action after action to undermine our democracy.”

“Trump and his allies in Congress,” Schiff said, “want you to forget: They took action after action to undermine our democracy, subvert the vote, and overturn the results of a free and fair election.

“And they are intent on doing irreparable harm to our democracy. Again,” Shiff said.

The tweet forwarded a tweet by New York Times reporter Katie Benner that sent out a story she published on Saturday that was headlined: “Meadows Pressed Justice Dept. to Investigate Election Fraud Claims.”

The first paragraph of that story said:

“In Donald J. Trump’s final weeks in office, Mark Meadows, his chief of staff, repeatedly pushed the Justice Department to investigate unfounded conspiracy theories about the 2020 presidential election, according to newly uncovered emails provided to Congress, portions of which were reviewed by the New York Times.”