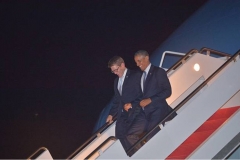 (CNSNews.com) - Less than two hours after it was announced that Rush Limbaugh had died an Amazon executive, who formerly served as President Barack Obama’s press secretary, went on twitter to attacked this great conservative icon.

“There is a direct line between Rush Limbaugh and January 6th—and it runs through Fox News,” said Jay Carney.

“Whether you loved him or hated him—and there are few people in between—Rush Limbaugh was indisputably a force of historic proportions. Over the past three decades, he did as much to polarize our politics as anyone and laid the groundwork for Trump and Trumpism.”