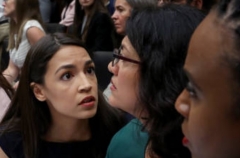 (CNSNews.com) - Rep. Alexandria Ocasio-Cortez (D.-N.Y.) sent out a tweet on Wednesday lamenting that people in her generation are not having enough children because of difficult circumstances they face.

AOC’s tweet forwarded a story from CBS News about the declining birth rates of younger adults.

“New data is confirming a baby boom that some doctors expected was actually a ‘baby bust,’” said the CBS story. “Health departments in more than two dozen states provided records to CBS News, showing a 7% drop in births in December—nine months after the first lockdowns began. Researchers say it continues a much bigger plunge in fertility in recent decades.”

AOC said in her tweet: “The actual crisis is how entire generations are sunk w/inhumane levels of student debt, low incomes, high rent, no guarantee of healthcare & little action on climate change which creates a situation where feeling stable enough to have a kid can feel more like a luxury than a norm.”