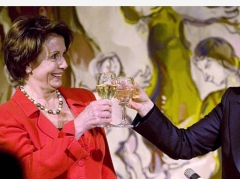 (CNSNews.com) - Bishop Robert F. Vasa of the Santa Rosa Diocese in California has joined Archbishop Salvatore Cordileone of the San Francisco Diocese in barring House Speaker Nancy Pelosi (D.-Calif.) from communion, when she attends Mass in his diocese, where she owns a home and vineyard.

According to the financial disclosure report that Pelosi filed last August with the Clerk of the House of Representatives she owns a home and vineyard in St. Helena, in Napa County, that is worth between $5 million and $25 million and that produces between $100,001 and $1,000,000 in income from grape sales.

Napa County is within the Diocese of Santa Rosa. 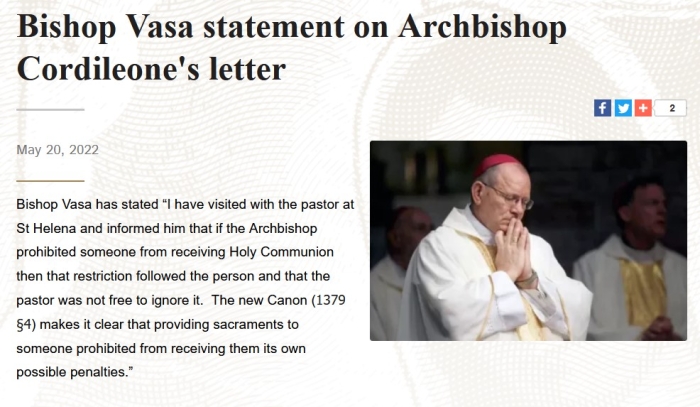 Bishop Vasa’s statement said: “I have visited with the pastor at St. Helena and informed him that if the Archbishop prohibited someone from receiving Holy Communion then that restriction followed the person and that the pastor was not free to ignore it. The new Canon (1379§4) makes it clear that providing sacraments to someone prohibited from receiving them [carries] its own possible penalties.”

On May 19, Archbishop Cordileone of San Francisco sent Speaker Pelosi a notification informing her that she was barred from taking Holy Communion until she repudiates her advocacy of legalized abortion.

"I am hereby notifying you that you are not to present yourself for Holy Communion and, should you do so, you  are not to be admitted to Holy Communion, until such time as  you publicly repudiate your advocacy for the legitimacy of abortion and confess and receive absolution of this grave sin in the sacrament of Penance," Cordileone told Pelosi in the notification.

A 2015 article in the Los Angeles Times was headlined: “Nancy Pelosi’s vineyard makes her fourth-richest Californian in Congress.”

“It can be an odd thing having Nancy Pelosi as your next-door neighbor,” said the Times’ story. “Especially when the House minority leader and her husband open up their bucolic Northern California estate and vineyard on the banks of the Napa River to the likes of Google’s Eric Schmidt, wealthy environmental activist Tom Steyer and Gov. Jerry Brown.”

“‘When all the black SUVs are circling around the property—like planes gathering over O’Hare Airport—that is when you know they are here,’ Susanna Kelham, who owns a winery next to the Pelosi property in St. Helena, told the Los Angeles Times,” the paper reported.

Pelosi’s main California residence is in the Pacific Heights neighborhood of San Francisco.