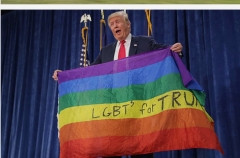 (CNSNews.com) - The U.S. Census Bureau is now asking Americans whether they describe themselves as “male, female or transgender” and whether they are “gay or lesbian” or “straight” which the bureau describes as being “not gay or lesbian.”

The bureau is asking the question in the latest version of its “Household Pulse Survey,” which the bureau initiated last year to monitor the impact of the COVID-19 pandemic on American society.

“The Household Pulse Survey is a 20-minute online survey studying how the coronavirus pandemic is impacting households across the country from a social and economic perspective,” says the Census Bureau. “The survey asks questions about how childcare, education, employment, energy use, food security, health, housing, household spending, Child Tax Credit payments, and intention to receive a COVID-19 vaccination, have been affected by the ongoing crisis.”

The current version of the Household Pulse Survey, which the Census Bureau calls “Phase 3.2” is the first Census Bureau survey to ask Americans about their “sexual orientation” and “gender identity.”

“The new version of the questionnaire, which entered the field on July 21, and is anticipated to continue through October 11, marks the first time a Census Bureau sponsored survey includes questions about sexual orientation and gender identity,” says the bureau.

The survey includes one question that appears to assume that a person’s sex is something that is “assigned at birth.” Specifically, question D6 says: “What sex were you assigned at birth, on your original birth certificate?” The respondent is given the choice of answering this question with one of only two possible answers: “Male” or “Female.”

But the very next question—D7—asks the following: “Do you describe yourself as male, female or transgender?” With this question, the Census Bureau gives the respondent four possible answers to choose from: “Male,” “Female,” “Transgender,” and “None of these.”

(This is a screen capture from the Census Bureau's Household Pulse Survey 3.2)

Question D9 on this Census Bureau survey asks: “Which of the following best represents how you think of yourself.” The list of potential answers the bureau provides for this question are: “Gay or lesbian;” “Straight, that is not gay or lesbian;” “Bisexual;” “Something else;” “I don’t know.”

(This is a screen capture from the Census Bureau's Household Pulse Survey 3.2)