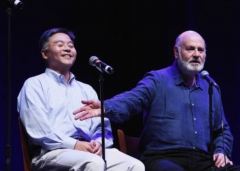 (CNSNew.com) - Rep. Ted Lieu (D.-Calif.), who professes to be a Catholic, sent out a series of tweets last week attacking the Catholic bishops of the United States for the church’s moral positions on issues ranging from abortion to same-sex marriage.

“Next time I go to Church, I dare you to deny me Communion,” Lieu said to the bishops in a tweet sent out on Friday.

He did not indicate whether he intended to go to Mass on Sunday—a day of obligatory Mass attendance for Catholics.

“Dear @USCCB I’m Catholic and I support: Contraception; A woman’s right to choose; Treatments for infertility; The right for people to get a divorce; The right of same sex marriage,” Lieu said in the tweet.

In another tweet Lieu sent out a story from The Hill reporting that Olympic organizers in Tokyo were going to hand out condoms to athletes.

“Dear @USCCB: Are you going to deny Communion to Catholic athletes who use condoms?” Lieu asked in the tweet.

“Or deny Communion to Catholic Olympic organizers for handing out condoms,” he said.

“Or deny Communion to Catholics who believe people should have the right to decide if they want to use contraception,” he said.

In yet another tweet, Lieu taunted the bishops about abortion and homosexuality.

“Dear @USCCB,” Lieu wrote, “Are you going to deny communion to Catholic who: Had an abortion? Are divorced but didn’t get an annulment? Happen to love another human being of the same sex?

“You should be deeply ashamed for politically weaponizing the sacred sacrament of Communion,” Lieu said the to the bishops.

The Catechism of the Catholic Church makes clear that someone can receive the Eucharistic only if they are in a state of grace. It says: "Anyone who desires to receive Christ in Eucharistic communion must be in the state of grace. Anyone aware of having sinned mortally must not receive communion without having received absolution in the sacrament of penance."

The Catechism of the Catholic Church is also clear on the grave evil of abortion and someone who cooperates in it. It says the following:

“Human life must be respected and protected absolutely from the moment of conception. From the first moment of his existence, a human being must be recognized as having the rights of a person - among which is the inviolable right of every innocent being to life.

‘Before I formed you in the womb I knew you, and before you were born I consecrated you.

‘My frame was not hidden from you, when I was being made in secret, intricately wrought in the depths of the earth.’

“Since the first century the Church has affirmed the moral evil of every procured abortion. This teaching has not changed and remains unchangeable. Direct abortion, that is to say, abortion willed either as an end or a means, is gravely contrary to the moral law:

‘You shall not kill the embryo by abortion and shall not cause the newborn to perish.

‘God, the Lord of life, has entrusted to men the noble mission of safeguarding life, and men must carry it out in a manner worthy of themselves. Life must be protected with the utmost care from the moment of conception: abortion and infanticide are abominable crimes.

“Formal cooperation in an abortion constitutes a grave offense. The Church attaches the canonical penalty of excommunication to this crime against human life. ‘A person who procures a completed abortion incurs excommunication latae sententiae,’ ‘by the very commission of the offense,’ and subject to the conditions provided by Canon Law. The Church does not thereby intend to restrict the scope of mercy. Rather, she makes clear the gravity of the crime committed, the irreparable harm done to the innocent who is put to death, as well as to the parents and the whole of society.”