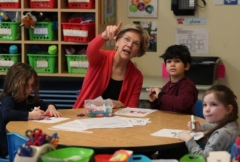 (CNSNews.com) - Sen. Elizabeth Warren (D.-Mass.) put out a tweet on March 6 reiterating her calls for universal child care and universal pre-kindergarten provided by government, so that government can take care of pre-school children rather than parents.

“We’ve been talking for long enough,” Warren said in her tweet.

“It’s way past time for Congress to act on universal child care, universal pre-k, home- and community-based care, fighting climate change, and getting giant corporations to pay taxes,” she said.

“I am going to keep pushing all the way,” she said.