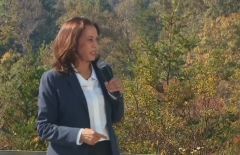 (CNSNews.com) - Sen. Kamala Harris (D.-Calif.) said in a campaign appearance in Asheville, N.C., on Wednesday that she will oppose the confirmation of Judge Amy Coney Barrett to the U.S. Supreme Court because among other things “the right of women to make decisions about their own body.”

“But yet they are trying to push through this nomination,” Harris said.

“I served…on the Judiciary Committee,” she said. “I will say publicly, I will oppose her confirmation for a number of reasons that include the illegitimacy of the process, that include the right of women to make decisions about their own body and their own reproductive health care, that include the need to maintain the Affordable care act.

“But they are pushing this thing through while there is a bill sitting there on a desk that’s been sitting there for 150 days, called the HEROES Act, that would bring relief to all these people who are suffering right now,” said Harris.