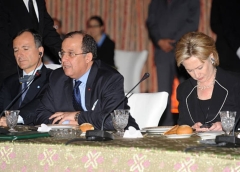 (CNSNews.com) - The Office of the Inspector General for the Department of Justice released a report in June 2018 that stated that the FBI had “identified ’81 email chains containing approximately 193 individual emails that were classified from the CONFIDENTIAL to TOP SECRET levels…and sent to or from [Hillary] Clinton’s personal server.”

The IG cited the information from a “letterhead memorandum” (LHM) that the FBI produced about its investigation of the matter.

The IG report also noted that “[n]one of the emails…included a header or footer with classification markings.”

“According to the LHM,” said the IG report, “the FBI, with the assistance of other USIC [U.S. intelligence community] agencies, identified ’81 email chains containing approximately 193 individual emails that were classified from the CONFIDENTIAL to TOP SECRET levels at the time the emails were drafted on UNCLASSIFIED systems and sent to or from Clinton’s personal server.’ 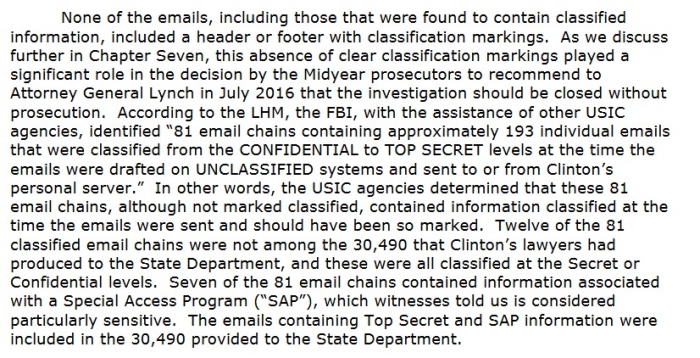 “In other words,” said the IG, “the USIC agencies determined that these 81 email chains, although not marked classified, contained information classified at the time the emails were sent and should have been so marked.”

“None of the emails,” said the IG, “including those that were found to contain classified information, included a header or a footer with classification markings…this absence of clear classification markings played a significant role in the decision by the Midyear prosecutors to recommend to Attorney General Lynch in July 2016 that the investigation should be closed without prosecution.”

In fact, the FBI had initially missed some email chains that were in fact marked as classified.

“In June 2016,” the IG continued, “near the end of the investigation, investigators found three email chains, consisting of eight individual emails, that ‘contained at least one paragraph marked ‘(C),’ a marking ostensibly indicating the presence of information classified at the CONFIDENTIAL level.’ According to a June 13, 2016 text message exchange between [Peter] Strzok and [Lisa] Page, the emails containing the ‘ (C)’ portions markings were part of the 30,490 that Clinton’s attorneys had provided to the State Department in 2014 but the FBI did not notice them until June 2016 after the IC IG discovered them.

“By that point in time” said the IG, “as discussed below [FBI Director James] Comey had been drafting his statement announcing the closing of the investigation.”