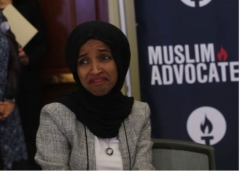 “So ‘he’s Muslim’ is trending, did I miss ‘he’s Christian’ trending for last week’s Atlanta mass murderer?” Omar said in her tweet.

“The conservative Baptist church attended by the accused Atlanta gunman expelled him from its congregation Sunday morning, saying he is no longer considered a ‘regenerate believer in Jesus Christ,’” the Post reported.

“Parishioners of Crabapple First Baptist Church in Milton, Ga., voted to remove Robert Aaron Long, 21, from the church’s membership following an hour-long service dedicated to the eight people he is charged with killing at three Atlanta-area spas Tuesday night,” the Post said.

“The suspect behind the shooting in Boulder, Colorado, appears to have a Facebook page touting his Islamic faith and his love of UFC while lamenting he does not have a girlfriend,” the Washington Examiner reported on Tuesday.

“Yeah if these racist Islamophobic people would stop hacking my phone and let me have a normal life I probably could,” the Examiner quotes Ahmad Alissa as saying on his Facebook page.

“Make sure that you are the one who teaches your child Surah Al fatiha. You will get the reward of every prayer,” said a meme the Examiner says Ahmad Alissa shared.