Jill Biden Pays Homage to ‘the Protectress of the Unborn’ 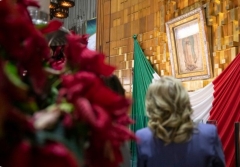 First Lady Jill Biden at the Shrine of Our Lady of Guadalupe. (Screen Capture)

(CNSNews.com) - When First Lady Jill Biden was in Mexico City on Sunday, she went with Mexican First Lady Beatriz Gutierrez Muller to pay homage at the Basilica of Our Lady of Guadalupe, the Protectress of the Unborn.

“Began my trip to Mexico City with a visit to the beautiful Basilica of Our Lady of Guadalupe,” Jill Biden said in a tweet, which featured a photograph of her standing in front of the framed image of the Virgin Mary as she had appeared to the Mexican peasant, Juan Diego, in 1531.

The Basilica itself sent out a tweet with four photos of Biden at the shrine in the company of Mexican First Lady Beatriz Gutierrez Muller and the basilica’s rector, Msgr. Salvador Martinez Avila. 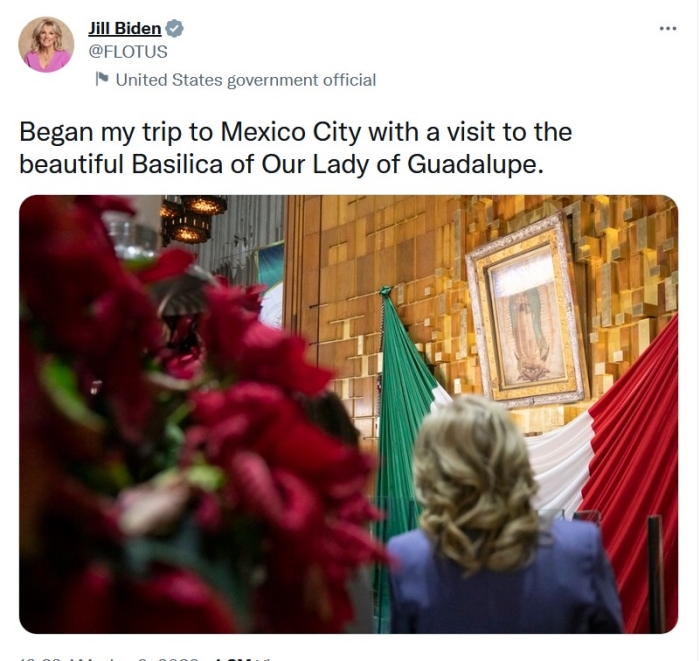 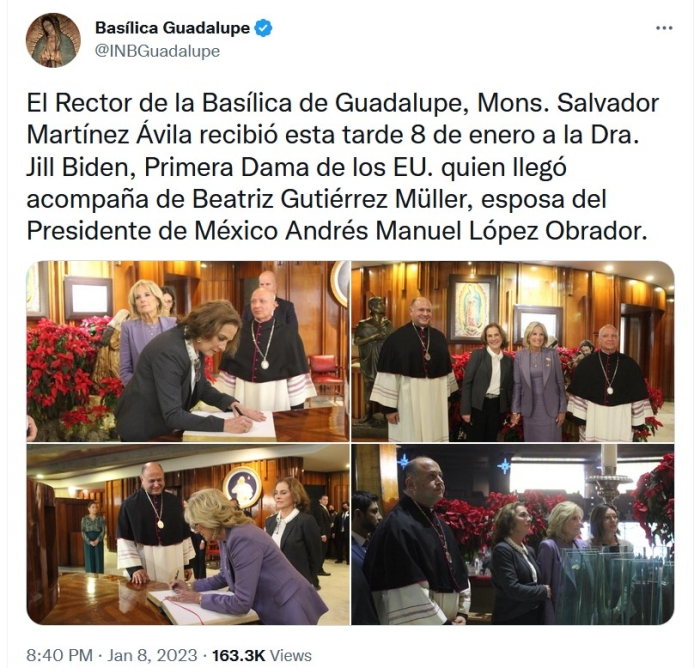 “Our Lady of Guadalupe first introduced herself as the Mother of God and the mother of all humanity when she appeared on the hill of Tepeyac in Mexico in 1531,” says the Vatican News. “An indigenous peasant, Juan Diego, saw a glowing figure on the hill. After she had identified herself to him, Our Lady asked that Juan build her a shrine in that same spot, in order for her to show and share her love and compassion with all those who believe.”

A prayer to Our Lady of Guadalupe posted by the U.S. Conference of Catholic Bishops addresses her as “Patroness of unborn children.” It says:

we implore your intercession
"for every child at risk of abortion.
Help expectant parents to welcome from God
the priceless gift of their child’s life.

Console parents who have lost that gift
through abortion,
and lead them to forgiveness and healing
through the Divine Mercy of your Son.

Teach us to cherish
and to care for family and friends
until God calls them home.
Help us never to see others as burdens.

Guide our public officials
to defend each and every human life
through just laws.
Inspire us all to bring our faith into public life,
to speak for those who have no voice.

We ask this in the name of your Son,
Jesus Christ, who is Love and Mercy itself.
Amen.