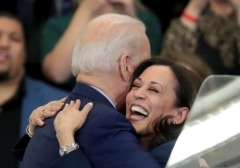 (CNSNews.com) - Former Vice President Joe Biden is promising that if he is elected president he “will make systemic changes to address sexual harassment and other discrimination so workplaces are safe and fair for all.”

This will include signing the “Bringing an End to Harassment by Enhancing Accountability and Rejecting Discrimination in the Workplace (BE HEARD) Act.”

“Tens of millions of workers, most of whom are women of color, report being sexually harassed at work,” says a page on Biden’s campaign website that is entitled “The Biden Agenda for Women.”

“This harassment often leads to devastating consequences, including mental health problems and fewer opportunities for career advancement,” says Biden’s webpage. “In some egregious cases, women are forced out of their jobs.

“While harassment is illegal, there are too many barriers for people to seek justice,” says the Biden campaign webpage. “For example, 60 million workers have been forced to sign contracts waiving their rights to sue their employer and over one-third of the workforce is bound by nondisclosure agreements that stop workers from speaking out about harassment and discrimination.

“As President, Biden will make systemic changes to address sexual harassment and other discrimination so workplaces are safe and fair for all,” says the Biden campaign webpage.

Below is a screen capture of a passage from "The Biden Agenda for Women" which indicates that Biden "will make systemic changes to address sexual harassment and other discrimination so workplaces are safe and fair for all:"

The BE Heard Act, according to its official summary, will do the following:

“Specifically, the bill (1) makes it an unlawful employment practice to discriminate against an individual in the workplace based on sexual orientation, gender identity, pregnancy, childbirth, a medical condition related to pregnancy or childbirth, and a sex stereotype; (2) prohibits employers from entering into contracts or agreements with workers that contain certain nondisparagement or nondisclosure clauses; (3) prohibits predispute arbitration agreements and postdispute agreements with certain exceptions, and (4) establishes grant programs to prevent and respond to workplace discrimination and harassment, provide legal assistance for low-income workers related to employment discrimination, and establish a system of legal advocacy in states to protect the rights of workers.”