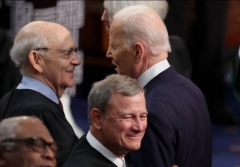 (CNSNews.com) - When the Supreme Court heard oral arguments in the case of Kennedy vs. Bremerton School District on April 25, Justice Stephen Breyer declared that there were “54 different religions in the United States” and then listed a few of them—including “Satanists” and “Catholics, Protestants, Jews.”

The Kennedy vs. Bremerton School District is looking at whether it was legitimate for a public school district to fire an assistant football coach for saying a private prayer on the football field after football games.

“The problem of prayer in school has been the fact that there are 54 different religions in the United States, now,” said Breyer, “and so what—going back to the 18th Century, the 17th Century, what we’re worried about is maybe it’s—here, it was the Satanists, but, I mean, it could be, you know, the Catholics, Protestants, Jews, Shintos, Mohammedans, and one group thinks why this group is being favored by the school, the other one thinks what about this one and so forth.

“So, we have a kind of neutrality,” Breyer said.

“Now, it’s the same question,” he said. “Right after the game, right before the bell rings in the morning, the teacher, the coach, says let us pray, prays our loud, and students join.

“And, indeed,” said Breyer, “this one told all the press, so there were going to be a lot of people there. But leaving that out, this doesn’t seem like a new problem. It just seems like a line-drawing problem about the 50-yard line just after the game when the school said don’t do it on the 50-yard line, do it 10 minutes later, and…do you see what’s bothering me?

“And am I right about how to see the case?” asked Breyer.