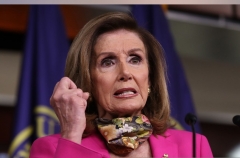 Pelosi indicated that Republicans in the meeting had expressed some hesitancy about using the bill to promote electric vehicles.

A reporter later asked Pelosi: “Do electric cars need to be in the bill?”

Rep. Peter DeFazio (D.-Ore.), the chairman of the House Transportation and Infrastructure Committee, then stepped in to express his support for promoting electric cars.

“GM is going all electric. Okay. FedEx is going electric with semis,” he said.

“Are we going to keep up with the world? Are we going to deal with climate change or not?” said DeFazio. “They can't continue. If they tell me they're worried about sea level rise, they tell me they're worried about severe weather events, and I said, ‘Well, don't you want to deal with the root cause?’ ‘Oh, no, no, no, we don't believe in that climate change stuff.’ Well, you know, drop it.

“I made the business case,” said DeFazio. “There's a business case for electrification. Right now, that's the only feasible technology. Hydrogen has a future–we don't have a way to transport it. We don't have green hydrogen. We're working on that. There will be a lot of research and future fuels potentially.  Mayor Garcetti and I talked about this today for bus fleets and things in cities. But we've got to deal with climate change. They can't deny it anymore.  All right.”

Here is the full transcript of Pelosi’s and DeFazio’s press briefing:

“I think it's very clear to see why we are so blessed to have Peter DeFazio as the Chair of the Transportation and Infrastructure Committee.  He has decades of experience and knowledge on the subject.  He has a vision about how we take our country into the future.  As I say to him all the time, ‘Peter, our hopes are riding on you.’  Because he knows the territory, and he knows the issues.

“And the fact that we are highlighting the Mayors who are here, Mayors who–previous Mayors who are now Members of Congress.  Congressman Stanton of Phoenix, Arizona and Mayor Albio Sires of New Jersey.  And then we have three guest Mayors who are here.  Mayor Stoney, Mayor Lucas and from California, Mayor Garcetti, who instituted one of the biggest infrastructure initiatives on the ballot successfully – but the other Mayors have their own experience.

“And I'm honored also to be here with our colleague who's the Chair of the Transportation and Infrastructure – Transportation and Transit Committee, Congresswoman Eleanor Holmes Norton, Representative of the soon-to-be state of Washington, D.C.

“Let me just say this.  My colleagues who are Mayors are probably tired of hearing me say this, but I grew up in the Mayor's house.  When I was in first grade, my father was Mayor.  When I went away to college, my father was still Mayor.  My brother was Mayor, both of Baltimore.  And I know how important that job is, how close to the people it is, how ready to meet the needs.  So, I commend them for their leadership.

“And in almost every subject you can name, these Mayors gathered here and others across the country are the first line of defense, again, of meeting the needs of the American–of America's people.  And to do so in a way–and to do so in a way that benefits the people as well as the economy of the region.  And now, the benefit of–of the planet.

“Mayors are–again, they're the buffer.  There's nothing between them and their constituents.  They must deliver.  And so, the fact that they have made this a priority is really a great thing for our country.  And what I want to say to them is ‘Thank you.’

“And when nonprofits will come to me and say, ‘How should we invest our money if we're interested in this or that?”  I'll say, ‘See what the Mayors want to do, because then you will see action and you will see results.’

“I just came from a meeting at the White House, as you probably have observed, that just ended, 90 minutes, with the President and the four leaders: Mr. Schumer and I, and Mr. McConnell and Mr. McCarthy.

“It was a positive meeting in terms of agreeing that we want to build the infrastructure of America – that we have to stipulate as to what that would include.  And many of the issues that you just named, Mr. Chairman, many of the issues that you just named – but it will – again, the President has his vision.  Congress will work its will.  But I feel very optimistic – in any event, I felt optimistic about our ability to pass such a bill.  Very – more optimistic now about being able to do so in a bipartisan way.  But we’ll see.  We’ll see.

“But it was positive. It took us a few steps forward.  One area of, shall we say, not total agreement was electric cars.  But, again, we didn’t go through a list and say, ‘Yes on this, no on that.’  But that emerged as something that they might not be too fond of – just to give you some of the flavor of what happened at the meeting.

“But it was by and large a very strong commitment on the part of the President that his interest in bipartisanship was sincere.  We all agreed that infrastructure has always been nonpartisan or bipartisan in our history.

“Now, it's my pleasure to yield the floor to the distinguished Mayor of Los Angeles–as I mentioned, author of one of the biggest initiatives, I think, at least in local history around the country–local, not just for our own region in California. He knows the importance of infrastructure to commerce, to quality of life, clean air, and the rest for our kids, as well as promotion of job creation and the rest.

“Mr. Mayor, Eric Garcetti.  I almost called him by his father’s name.”

Reporter: “Madam Speaker, Madam Speaker?  At the White House, Mitch McConnell, Senator McConnell, said that the Republicans are not interested in reopening the 2017 tax bill and they made that clear to President Biden today.  I wonder if you argued against that today?  And do you think he can carry out these infrastructure plans that Biden envisions, as he envisions them, without reopening that bill?”

Pelosi: “Let me just first salute the President of the United States.  You heard a word almost everyone said here: bold.  For putting forth a bold package, a vision for how we build the future in a way that grows the economy by creating good-paying jobs, which is a public health issue by cleaning the air and the rest, promotes commerce.  It's just spectacular and makes us credible on the world stage that we are able to lead in our own country.

“So, I salute the President for the meeting that he had as well to achieve that goal.  As I said earlier, the President is committed to bipartisanship.  We all have a responsibility to seek that where we can find it.

“And that is what we are intending to do to find our common ground on the definition of infrastructure for this particular piece of the legislation as we go forward.

“I myself think that what the Republicans did on the tax scam, to give 83 percent of the benefits to the top one percent, was a big rip, and it hurt working families in our country.  He considers it sacrosanct.  We have a different set of values.

“But what we did agree in the meeting is, let's agree on what we're trying to achieve, and then we can talk about how we pay for it.  Let's not lead with the disagreement.  We'll find a way because the public knows that this is necessary.  And what's interesting listening to the Mayors – the Mayors who are currently Mayors in the arena, still in City Halls, is their commitment to all of this and listening to the Mayors who are no longer – our former Mayor who are here in the Congress and bringing their experience.  Mayors make good Members of Congress.

“Especially when it comes to building the infrastructure of Congress.  Don't you agree?  So, no, – again, big, bold, as soon as we can, as bipartisan as possible.

Chairman DeFazio: “There we go.  That's a good summary.  Yes.”

Reporter: “Okay, I wanted to ask for Madam Speaker or Chair DeFazio–have you guys come to a mutual understanding of what the definition of infrastructure is in a bipartisan bill will be?”

Chairman DeFazio: “I think the Speaker just addressed that.  She said that is still an ongoing discussion with the Republicans.  I do believe Republicans support broadband, you know, wastewater, I would, you know – I have a bipartisan bill on wastewater, you know.  Many of the other issues of, you know, the deal with climate change, schools, housing, those are things that we're going to need to work through with Republicans.”

Reporter:  “How would your committee support funding the highway bill?  Would you consider raising fuel taxes?”

Chairman DeFazio: “You know, I write a bill, I do the policy, and I hand the bill, which is a bill to the Ways and Means Committee, and they figure out how to pay for it.  So, direct that question to Richie Neal.”

Speaker Pelosi: “Well, I agree with the President's statement that he made that people making under $400,000 a year were not going to be taxed.  I agree with those who say that working families in our country should not have to subsidize the infrastructure of America while letting the wealthiest off.  So, I think there has to be fairness in all of this, and yes, I agree with what the Chairman said.”

“Excuse me, I have to have a call now about Israel, so I'm going to excuse myself.”

Reporter: “ Quick question, Mitch McConnell said, he said, ‘This is our red line on this tax bill. ’ He said ‘red line.’  Do you have any red lines on this bill, what has to be included?”

Speaker Pelosi: “No, no.  And this is not a place for any negotiation.  Some of the things that we did talk about were the fact that there are so many unpaid taxes in our country, probably the range is $1.2, $1.4, a trillion dollars, more than a trillion dollars that could pay for a big piece of this.  Richie Neal has ideas about Build American Bonds and issues like that.

“So, why should–why should working families be underwriting the infrastructure, the roads and the bridges and the rest that that commerce travels over?  I think that–I think we'll be able to find a place on this.

“I myself have my own problems with their bill, separate and apart from–from this legislation, but there could be enough money depending on what the final amount is. There could be enough other money, but I would not take anything off the table.  And I'm not drawing any red lines.”

GM is going all electric. Okay, FedEx is going electric with semis.  Americas going–the world's going electric. Are we going to keep up with the world? Are we going to deal with climate change or not? They can't continue.  If they tell me they're worried about sea level rise, they tell me they're worried about severe weather events, and I said, ‘Well, don't you want to deal with the root cause?’  ‘Oh, no, no, no, we don't believe in that climate change stuff.’ Well, you know, drop it.

“I made the business case. There's a business case for electrification. Right now, that's the only feasible technology. Hydrogen has a future–we don't have a way to transport it.  We don't have green hydrogen.  We're working on that.  There will be a lot of research and future fuels potentially.  Mayor Garcetti and I talked about this today for bus fleets and things in cities.  But we've got to deal with climate change.  They can't deny it anymore.  All right.  Good.