Nancy Pelosi: ‘But to Be Clear About the Constitution: It Does Not Forbid Discrimination Against Women’ 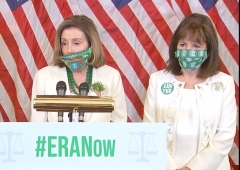 (CNSNews.com) - House Speaker Nancy Pelosi (D.-Calif.) held a press briefing on Wednesday to show support for a bill sponsored by Rep. Jackie Speier (D.-Calif.) that would eliminate the deadline for states to ratify the Equal Rights Amendment to the U.S. Constitution.

Before Pelosi spoke, Speier alluded to an interview that the late Justice Antonin Scalia gave in 2011 to California Lawyer magazine.

In that interview, Scalia was asked whether it was an error to apply the Equal Protection Clause of the 14th Amendment “to sex discrimination” or “sexual orientation.”

“But, you know, if indeed the current society has come to different views, that's fine,” Scalia continued. “You do not need the Constitution to reflect the wishes of the current society. Certainly, the Constitution does not require discrimination on the basis of sex. The only issue is whether it prohibits it. It doesn't. Nobody ever thought that that's what it meant. Nobody ever voted for that. If the current society wants to outlaw discrimination by sex, hey we have things called legislatures, and they enact things called laws. You don't need a constitution to keep things up-to-date. All you need is a legislature and a ballot box.”

In her press briefing with Pelosi, Speier pointed to what Scalia had said as an explanation for why it was necessary to eliminate the deadline for ratification of the Equal Rights Amendment.

“The ERA is about equality, survival, dignity and respect,” said Speier. “And the words of Antonin Scalia keep ringing in my ear and should be ringing in every woman’s ear in America: Certainly, the Constitution does not require discrimination based on sex. The only question is does it prohibit it. It does not.”

When Pelosi went to the podium to speak after Speier, she also pointed to what Scalia had said.

“Now, let me take up where you left off,” said Pelosi. “The Justice of the Supreme Court, not known to be friendly to some of our issues, but to be clear about the Constitution, it does not forbid discrimination against women.  It does not.”

The Equal Rights Amendment says: “Sec. 1: Equality of rights under the law shall not be denied or abridged by the United States or by any State on account of sex. Sec. 2. The Congress shall have the power to enforce, by appropriate legislation, the provisions of this article. Sec. 3. This amendment shall take effect two years after the date of ratification."

Speier’s bill would remove any deadline for ratifying the Equal Rights Amendment. On Wednesday, it passed the House by a vote of 222 to 204.

The late Phyllis Schlafly led the thus far successful fight to stop ratification of the ERA.

Prof. Don Critchlow of Arizona State University has explained on History.com why Schlafly opposed the amendment, beginning with the fact that it was vaguely worded.

“That meant it was going to have to be interpreted by the courts and she—and her large number of followers—were concerned that the courts would interpret it as abortion on demand, same-sex marriage and women in the draft.” Critchlow said, according to History.com. “Furthermore, she felt that much of the legislation protecting women in pay and gender discrimination had already been enacted.”

Here is the transcript of part of Pelosi’s remarks at the press briefing, where she and Speier talked about Speier’s bill to eliminate the deadline for ratifying the Equal Rights Amendment:

Pelosi: “Thank you very much, Congresswoman Speier, for your relentless leadership on this important issue to our country, because as you say, when women succeed, America succeeds.  So, this is about our entire country.  And let me take up where you left off.

“The Justice of the Supreme Court, not known to be friendly to some of our issues, but to be clear about the Constitution, it does not forbid discrimination against women.  It does not.  So, that's why it's an honor to be with Jackie Speier and with Carolyn Maloney, for 25 years has been fighting this fight.  Jackie fighting this fight on the removing that time barrier.

“Thank you to the Chairman of the Judiciary Committee for being here for VAWA, ERA. It's a good day. You don't have a white suit, but it's okay. You got the gavel.”