Nancy Pelosi: ‘Lord, Make Me an Instrument of Thy Peace’ 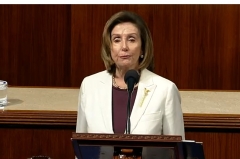 (CNSNews.com) - House Speaker Nancy Pelosi (D.-Calif.) announced in a speech on the House floor this afternoon that she will not be seeking a leadership role in the newly elected House of Representatives—and quoted from the Prayer of St. Francis as she did so.

“And, again, for those who’ve sent me here, for the people of San Francisco, for entrusting me with the high honor of being their voice in Congress,” said Pelosi.

“In this continued work, I will strive to honor the call of the patron saint of our city, St. Francis: Lord, make me an instrument of thy peace.”

Scholars have not attributed the authorship of this prayer to St. Francis himself but trace its history only as far back as the early 20th century,

“The most famous expression of Franciscan peacemaking is not a depiction of the wolf. Rather it is the ‘Prayer of St. Francis,’ or the ‘Peace Prayer,’” U.S. Catholic reported in a 2017 article about St. Francis.

“[Patricia] Appelbaum [author of the book ‘St. Francis of America’] notes that this prayer is recorded nowhere in Franciscan sources, instead first appearing in a French Catholic magazine in 1913 and printed in Italian by a Vatican magazine in 1916,” says the article. “The prayer was largely popularized in the English-speaking world by Protestants and gained popularity during the dark days of world war, economic depression, and uneasy peace that loomed over the first half of the 20th century.”

Christianity.com says the following about the prayer: “This prayer was first recorded in 1912 in France, in a spiritual magazine called La Clochette (The Little Bell). The magazine was published by a Catholic group called The Holy Mass League. The group was established by Father Esther Bouquerel in 1901. In the version published in La Clochette, the prayer was entitled, in French, “A Beautiful Prayer to Say During the Mass”. Since it was published anonymously, the original author is not known. Possibly, Father Bouquerel himself could have written the prayer.”

The prayer of St. Francis states:

“O divine Master, grant that I may not so much seek
“to be consoled as to console,
“to be understood as to understand,
“to be loved as to love.
“For it is in giving that we receive,
“it is in pardoning that we are pardoned,
“and it is in dying that we are born to eternal life.
“Amen.”