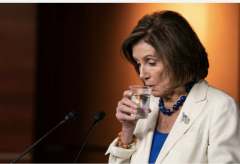 (CNSNews.com) - House Speaker Nancy Pelosi (D.-Calif.) put a personal perspective on the problems people have been experiencing in Texas this week because of the freezing weather when she revealed at her Thursday press briefing that she has a daughter who lives in Houston.

“Speaking of inclement weather, our hearts and prayers go out to the people of Texas for what they are suffering and their situation there in terms of lack of water, lack of energy,” Pelosi said.

“I had my daughter--I have a daughter in Houston, so I know firsthand what her concerns are,” said the Speaker. “But her concerns are minor compared to people in need, people truly in need. To lose water and service for my family is one thing, but, for people who don't have so many options, it's just heartbreaking.”

“Everybody has their personal experience,” Pelosi said a moment later. “My daughter's home has no water.

“Pipes are breaking all over because of the cold,” she said.

“Again, they can handle it, but a lot of people can't,” said Pelosi. “So, it's the question of needing water and food and energy and vaccines and the rest. We really have to be on top of that, and hope that there would be some preparation for the future.”