Pelosi Condemns ‘the Defecation’ at the Capitol on January 6 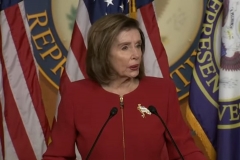 (CNSNews.com) - House Speaker Nancy Pelosi (D.-Calif.) spoke out once again against the storming of the U.S. Capitol on January 6 and specifically condemned what she called “the defecation” that took place.

“So when they made the assault on the building that was one thing, but the fact is they also made an assault on the Constitution of the United States,” Pelosi said.

“So sad that even with the horror, the defecation, the physical violence, the crudeness of it all, of that assault on the Capitol—and I was insistent and Sen. McConnell and we all agreed in the leadership that we would come back,” she said.

“We were not going resume someplace else, we were going to come back,” she said. “Not in an undisclosed location, but in the Capitol of the United States. That even after all of that a majority of the Republicans in the House voted not to accept the certification of the Electoral College.

“And, now, these people are coming back to praise the people who were out to kill, out to kill members of Congress, successfully causing the deaths—successfully is not the word, but that’s the word, because that is what they set out to do--of our law enforcement,” she said.

“So this is, whatever your questions are, understand how strongly we think about this—I do not want to say feel—I’m saying think about this and what we need to do in the ongoing,” said Pelosi. “Because we want to return the Capitol to a place where people can come, children can learn, families can celebrate together the greatness of our country. The children can see as we honor leaders of our past that we are focused on the future for them as our leaders of the past would insist upon.”