Pelosi's Farewell Address: ‘I Stand Before You as…a Devout Catholic’ 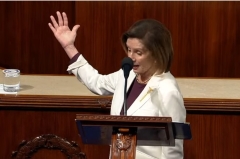 (CNSNews.com) - House Speaker Nancy Pelosi (D.-Calif.) went down to the House floor on Thursday to announce her farewell to the Democratic leadership and the American people.

In her speech, Pelosi announced that she would not be seeking reelection to the Democratic congressional leadership in the upcoming Congress.

In doing so, she described herself as a “devout Catholic” and a “patriotic American”

“My colleagues, I stand before you as Speaker of the House. As a wife. A mother. A grandmother. A devout Catholic. A proud Democrat,” said Pelosi. “And a patriotic American: a citizen of the greatest Republic in the history of the world.”