Rep. Ilhan Omar: ‘Our Communities Are Living in Terror’ 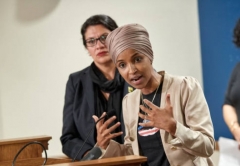 (CNSNews.com) - Rep. Ilhan Omar (D.-Minn.) sent out a tweet on Tuesday morning decrying the evil mass shooting in a Boulder, Colo., supermarket and stating that American “communities are living in terror.”

“Our communities are living in terror and they need more than our ‘thoughts and prayers,’” Omar said in her tweet.

“No more cowering to the gun lobby,” he said. “We need to pass gun safety legislation NOW.”

Omar’s tweet forwarded an Associated Press story about the shooting that was published in the Minneapolis Star Tribune.

The shooting in Boulder killed ten people, including a police officer. A suspect has been arrested.